The revival of “Into the Woods” 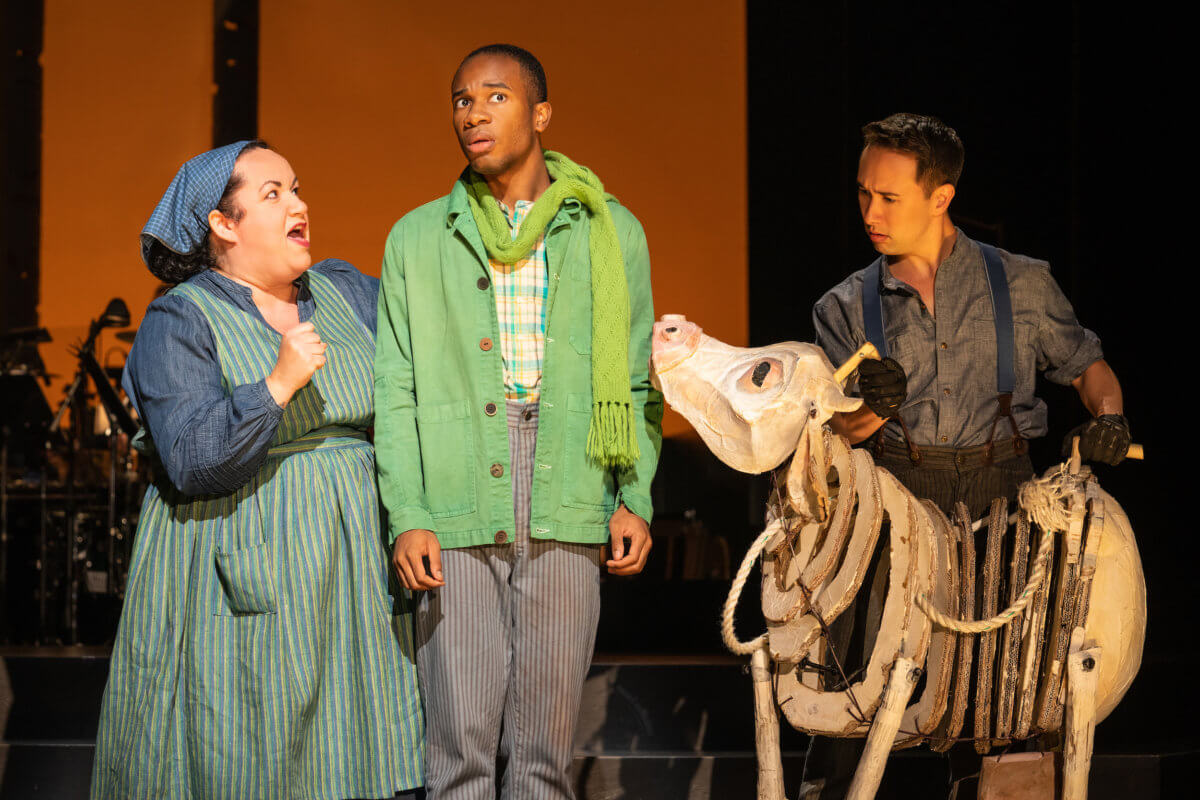 Aymee Garcia, Cole Thompson, and Kennedy Kanagawa in “Into the Woods.”
Matthew Murphy and Evan Zimmerman for MurphyMade

If there ever was a time to revive “Into the Woods,” this is it. Stephen Sondheim’s 1987 musical is a pastiche of classic fairytales that’s rife with Freudian and Jungian undertones — like the source material that inspired it, “Grimm’s Fairytales.” At once darkly existential and brightly hopeful, the musical is about facing down demons, finding one’s power, suffering loss, and going on in a changed world. It is a story of survival and hope when the ground is shifting beneath you. “The woods” have always been a metaphor.

The superb Broadway revival now at The St. James is a transfer of the Encores! production earlier this year, and for all the show’s darkness, this production is a spirited, fun, and uplifting evening that allows the brilliance of the score to shine, particularly in the hands of the exceptional cast.

The set, as is usual for Encores!, is simple — in this case a staircase with the orchestra in view and houses indicating each of the main stories hanging in the air. When the action moves to the woods, abstract birch trees descend from the flies, a sly homage from designer David Rockwell to the birch trees designed by Boris Aronson for another Sondheim classic, “A Little Night Music.”

Director Lear DeBessonet has mounted a crisp, energetic production and added just a touch of meta commentary to the piece, which is timely given the current zeitgeist and at the same time draws the audience in by acknowledging the inherent abstraction — and artistry — of the piece.

The cast is a cavalcade of Broadway stars. Patina Miller brings a new edge to the role of the witch, and her frustration at those who won’t confront the reality of the situation is palpable. It’s complex and intriguing, and she makes the role her own. Gavin Creel is appropriately charming as Cinderella’s Prince and comically sexy as the wolf. His cohort, Rapunzel’s Prince is played with style and good humor by Joshua Henry. Phillipa Soo is splendid as Cinderella, and Sara Bareilles is both grounded and fanciful as the Baker’s Wife. Her character, perhaps most of all, lives in the dual realms of stark reality and fanciful romance. These actors were all cast for their unique and spectacular voices, and as a result this complex score has never sounded quite so thrilling or immediate.

With the ravages of COVID-19, this is the year of the understudy, and at the performance I saw, the central role of the Baker was played by Jason Forbach, in for Brian D’Arcy James. Forbach has a wonderful voice, particularly in his solid lower register, and he fills the role with such understated sensitivity, nuance, and heart that it’s clear it’s only a matter of time until his name starts appear above the title of any show he’s in. Alex Joseph Grayson was in for the role of Jack (of beanstalk fame), and he, too, is a future star.

Jack’s cow, Milky White, is a puppet, brought to life with fun and feeling by Kennedy Kanagawa. In the original production, Milky White was a static statue, but here puppet designer James Ortiz has created an empathetic cow, one that Jack loves. Julia Lester makes a starry Broadway debut as Little Red, the hard-bitten but essentially innocent little girl whose trip to the woods forces her to grow up.

The Encores! orchestra under the direction of Rob Berman sounds great, and sound designers Scott Lehrer and Alex Neumann give the production an intimate feel that supports the rest of the production. Costumes by Andrea Hood are witty and creative, particularly given the limits that the Encores! budget would have had.

It’s good to be reminded that one of the emotional functions of fairytales for children — and indeed a great deal of children’s literature — is that by having a vicarious experience, even, as the song goes “now and then a bad one,” the child is emotionally prepared to confront real life experiences, recognize archetypes, and develop mechanisms for dealing with the world as it is.

It’s an empowering opportunity — and this magnificent production reminds us that even as adults, we can use a bit of that confidence and hope ourselves.