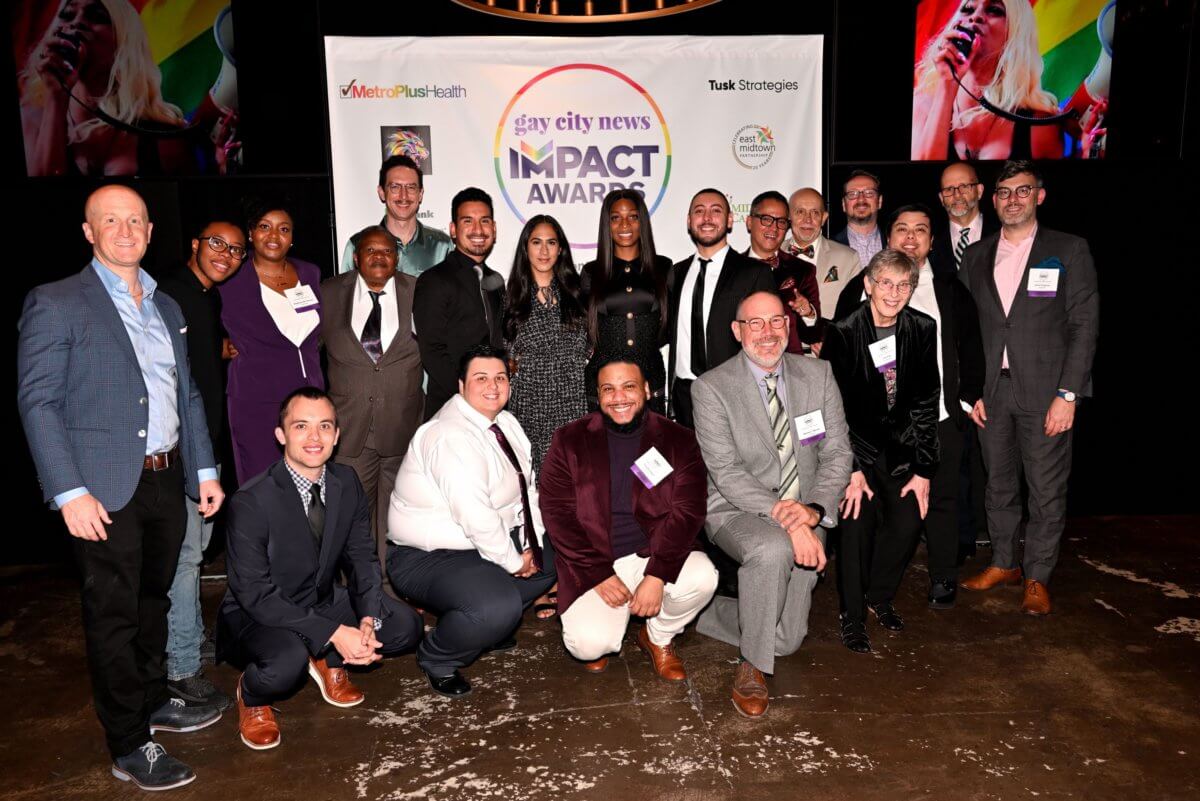 Some of the 2021 Gay City News Impact Award honorees with the Gay City News team at a special cocktail reception in October.
Donna Aceto

More than two dozen LGBTQ leaders and allies who have made a difference in the community were honored during a virtual edition of the sixth annual Gay City News Impact Awards on November 11.

Gay City News recognized 28 honorees hailing from a wide range of diverse backgrounds and careers. During opening remarks for the Zoom ceremony, Gay City News editor-in-chief Matt Tracy touted the awardees as changemakers who have used their roles to advance LGBTQ rights.

“In times of adversity, many of the honorees you will hear from tonight are essential in empowering our community,” Tracy said. “They include activists, artists, doctors, and others who are active in our community.”

Gay City News founding editor Paul Schindler, who retired from his role as editor-in-chief at the end of last year, served as emcee for the event.

“This is the sixth annual Impact Awards, and over half a dozen years we’ve had the opportunity to honor excellence across a wide range of fields by people who, day in and day out, contribute to the well-being and advancement of New York’s LGBTQ community,” Schindler said during the live broadcast.

The Impact Awards show featured presentations of awards as well as acceptance speeches from honorees. The event followed a cocktail reception for honorees last month at the penthouse at the Ravel Hotel in Long Island City, Queens, which gave Impact Award winners a chance to gather together in person. At that event, Schindler received a plaque engraved with the GCN logo in commemoration of his decades of service to Gay City News and LGBTQ journalism.

Among the Impact Award recipients were Liz Abzug — whose mother, the late Congressmember Bella Abzug, introduced the first version of the Equality Act in 1974. Abzug focused her acceptance speech on mobilizing the community to pass the long-stalled LGBTQ non-discrimination legislation once and for all.

“Here we are, 50 years later and that act has failed to pass the Congress,” Abzug said. “I would ask you to press your congresspeople, to tell them that we want this law passed.”

Award winners also included those who work in the medical field. Dr. Jess Ting, a gender-affirming surgeon at Mount Sinai’s Center for Transgender Medicine and Surgery (CTMS), has performed more than 2,000 gender-affirming surgeries on trans, non-binary, and intersex patients. He said during his acceptance speech that he was proud to receive the award and have his work highlighted alongside a slate of powerful advocates.

“It feels great to have our work at the Mount Sinai Center for Transgender Medicine and Surgery honored in this fashion,” Ting said. “It is a team effort.

“I’m accepting this award on behalf of all the incarcerated transgender people, intersex, and non-binary people across the state of New York,” she said. “We are fighting for you, and we see you.”

TS Candii, the founder of Black Trans Nation, thanked Gay City News for giving her a platform to amplify the concerns of the LGBTQ community.

“It means a lot to me,” TS Candii said. “It tells me to keep my head up, my heart open, and to continue to fight…Thank you again, Gay City News, for acknowledging the hard work and not overlooking or underestimating the power of the Black trans community.”

Stephanie M. Frierson, a registered nurse at Brooklyn Plaza Medical Center (Rising Heights), said her award inspires her to keep fighting for her most vulnerable patients.

“I’m extremely humbled by receiving this award,” Frierson said. “I will continue to use my platform to continue to work toward health equity for all serving all persons regardless of sexual orientation, gender, race, and/or socioeconomic status.”

“The work we do at the Ali Forney Center every year is to protect young people from the harms of homelessness… lesbian, gay, bisexual, transgender, queer, or questioning youth who are thrown out into the streets simply because of who they are,” Roque said. “Being honored and sharing the stage with so many amazing leaders and individuals helps to elevate those stories, our voices, and the important work that we do.”

Troy Blackwell, an LGBTQ advocate and director of Ready for Change, a political action committee, used his time at the podium to emphasize the importance of registering to vote. He also echoed Roque’s comments in bringing attention to homelessness among LGBTQ youth.

“Of the homeless population in the United States, 40 percent are LGBTQ youth. That is something that can no longer go on,” Blackwell said. “Please find ways to get involved and help the community.”

Tarik Carroll, the director of The EveryMan Project, an organization that empowers cis and trans men through body positivity, praised Amida Care, a non-profit community health plan serving many New Yorkers living with HIV/AIDS, for backing the group’s efforts.

“I am immensely grateful to be honored at this year’s Gay City News Impact Awards,” Carroll said.

The award ceremony also spotlighted legendary drag kid and LGBTQ advocate Desmond is Amazing, who received the Inspiring Leadership Award, presented by Breed Evolution Corp. While accepting the award, Desmond offered a message of hope for the audience.

“I do love being a leader and leading other people to be authentic and to be their true selves,” Desmond Is Amazing said. “Be yourself always no matter what anyone says and pay the haters no mind because they will never be as fierce as you and I.”

The evening’s presenters included Todd Canning, who is the director of Clinical Services for the Partnership In Care Program at MetroPlus Health, and Steven Garibell, a vice president at TD Bank.

To cap off the evening, Gay City News honored Identity House co-founder Lee Zevy with the Lifetime Achievement Award, presented by MetroPlus Health. Through her work with Identity House, which provides volunteer counseling to LGBTQ adults, has dedicated much of her life to providing free mental health services to the LGBTQ community.

“This [award] not only honors me, but the organization Identity House, the little non-profit that could,” she said. “We couldn’t have dreamed in 1971 that we would reach our 50th anniversary this year, where volunteer peer counselors and psychotherapists spend countless hours to provide mental health services to the gay and lesbian community, the LGBTQ+ now.”

Looking back on her career, Zevy says the award is not only a testament to her work, but the contributions of others who often go unrecognized for their impact on the LGBTQ community and society at large.

“We are the silent activists, and I’m so pleased to accept this award for all,” she said.

Below is the full video of our virtual Impact Awards event, followed by pictures from our cocktail event in October. Read honoree bios here.