Gallery Hops the River into Chelsea 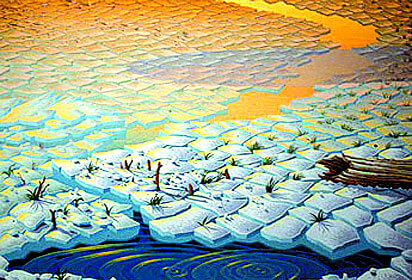 If you are walking down Tenth Ave. around 18th Street, a bright pink neon sign just might catch your eye. It’s not a nail salon or a pastry shop but rather the newest gallery in Chelsea.

The Bellwether Gallery, which for years held court in Williamsburg, took the big leap and has opened this month in Manhattan. The owner, Becky Smith, spoke out about how she wanted to have a gallery that invited people in, not shut them out. She chose the pink scripted sign as a semiotic marker of the “new” in contrast to the “old” gallery look that has prevailed in the art world for the last 20 years.

With her inaugural show titled “Hello Chelsea,” a large eclectic group of paintings, photographs, and sculptural installations introduces us to the artists previously shown in her Williamsburg gallery. This show gives us a glimpse of the gallery’s sensibility and, one hopes, of things to come.

Smith presents illustrative works that deliver a punch with a perverse or unexpected blow, as in Juliette Borda’s, “Accident,” a small gouache painting, in which a black bird pecks the eyes of an innocent pedestrian passing by a wig shop. There are Dame Darcy’s fairytales from hell––black and white pen and ink drawings––and Amy Wilson’s painting, “Decent Into Chaos,” a naively-painted landscape where the pollution from factories forms the word “terror” and the constellations spell “paranoia” while schoolgirls run around spouting political statements aimed at a big Bush family globe head. We are seduced by the idealized look and safety of a children’s book illustration, just in time for the artist to pull the rug out from under us, causing us to fall into their obtuse nightmare.

In the large mural by Adam Cvijanovic, a sexy red-haired naked woman basks in a field of flowers, while in the airbrushed landscape “Dew” by Todd Hebert, photo-realistic dewdrops are caught by a perfect spider web. In Melissa Brown’s “Some Velvet Morning,” a utopian landscape, also airbrushed and full of poppies, mountains, and a battalion of dragon flies, we are invited to bathe in a perfect sugarcoated celebration of life knowing that disaster and terror are looming just outside the canvas’ edge.

The show finishes, however, on a positive note with Cynthia Chan’s painting “Echolocated,” an image reminiscent of the work of the late Frank Moore, where a parched and thirsty desert is reborn into an oasis of fresh water, fledging plants erupting and pushing their way into the light in order to survive and start the cycle all over again.

Hopefully, this gallery with the pink neon sign will work for those of us in Chelsea in the same regenerative way.