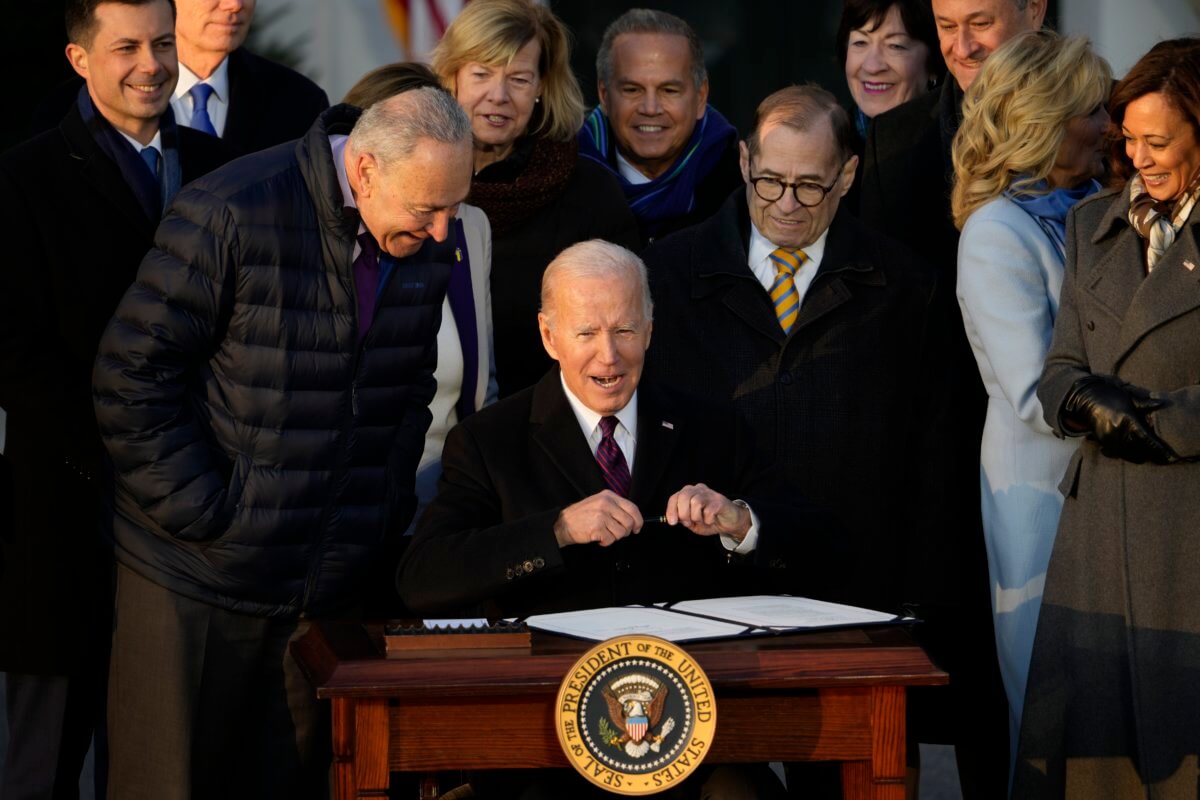 President Joe Biden signs the Respect for Marriage Act on Tuesday, Dec. 13, 2022, on the South Lawn of the White House in Washington.
AP Photo/Andrew Harnik

President Joe Biden, sporting his signature aviator sunglasses on a chilly but sunny day in the nation’s capital, emerged from the White House and made a declaration: “Today is a good day.”

Biden signed a bipartisan marriage equality bill into law on December 13 in front of 5,000-plus LGBTQ advocates and allies who gathered at the White House to celebrate the historic moment.

Cheers erupted across the South Lawn after the president put the finishing touches on the Respect for Marriage Act, which formally repeals the Defense of Marriage Act and protects same-sex and interracial marriages against future attempts by the Supreme Court to overturn the 2015 Obergefell v. Hodges ruling that guaranteed marriage rights for queer couples nationwide.

The law does not completely replicate the entire scope of the Supreme Court’s 2015 ruling in Obergefell v. Hodges  because it would not require states to issue marriage licenses. But it would require recognition of marriages performed in states where marriage equality is the law of the land.

“This law and the love it defends strike a blow against hate in all its forms,” Biden said. “And that’s why this law matters to every single American.”

The bill breezed through the House of Representatives last week after winning Senate passage following months of negotiations in an evenly divided upper chamber. Out lesbian Senator Tammy Baldwin of Wisconsin and bisexual Senator Kyrsten Sinema of Arizona worked on the bill with Republicans such as Susan Collins of Maine and Lisa Murkowski of Alaska.

“It’s one thing for the Supreme Court to rule on a case, but it’s another thing entirely for elected representatives of the people to take a vote on the floor of the United States Congress and say loudly and clearly, love is love,” Biden said. “Right is right. Justice is justice.”

The Biden administration ushered the bill into law with an elaborate bash at the White House. Sam Smith and Cyndi Lauper performed live, while Lady Gaga’s “Born This Way” blared on the loudspeakers after the bill was signed into law. Prominent LGBTQ leaders and advocates from across the country — including plenty of New Yorkers — posted countless selfies on social media as they reveled in the joy of the moment. Lawmakers from both houses of Congress surrounded the president and the vice president, Kamala Harris, who spoke ahead of Biden. Senate Majority Leader Chuck Schumer and House Speaker Nancy Pelosi also delivered remarks.

“As the great Harvey Milk once said, ‘Rights are won only by those who make their voices heard,’” Harris said. “And because you made your voices heard, marriage is more secure.”

Gina and Heidi Nortonsmith, who sued the State of Massachusetts and won marriage rights in 2003, also had a chance to speak at the podium.

The event, while striking a lively tone, also offered a reminder of the president’s own political evolution on LGBTQ rights. The White House played audio from Biden’s appearance on “Meet the Press” in 2012 when he first voiced support for same-sex marriage — then as vice president. That move helped to pave the way for then-President Barack Obama to endorse same-sex marriage days later.

All in all, the ceremony marked the conclusion of a remarkable — and rather sudden — legislative campaign to protect marriage rights at a time when the conservative Supreme Court has upended abortion rights and sided with religious conservatives on other LGBTQ rights cases. In a sign of just how quickly the issue of marriage returned to the political spotlight, a speech delivered by Schumer at the LGBT Center in Manhattan in January of this year focused squarely on the need for a federal LGBTQ non-discrimination bill. But as fears over Roe v. Wade morphed into reality in the subsequent months, the attention diverted to efforts to safeguard marriage equality. Supreme Court Justice Clarence Thomas’ comments reiterating his opposition to marriage equality brought even more urgency to the issue.

At the same time, the marriage bill represented a rare opportunity for bipartisanship, albeit with some caveats: The legislation contains religious exemptions for non-profit groups, for example, and specifies that the federal government would not have to recognize polygamous marriages. That language was clearly incorporated with the purpose of winning over enough Republican votes to overcome the threat of a filibuster.

The well-attended event featured a wide range of LGBTQ advocates — including those who played critical roles in advancing the marriage fight. The late Edie Windsor, whose legal challenge contributed to the demise of the Defense of Marriage Act and helped lead to nationwide marriage equality, passed away in 2017, but her surviving spouse, Judith Kasen-Windsor, was in attendance. Several plaintiffs in the Obergefell case — Joseph Vitale, Thom Kostura, Ijpe DeKoe, Kim Franklin and Tammy Boyd — were also at the White House for the ceremony.