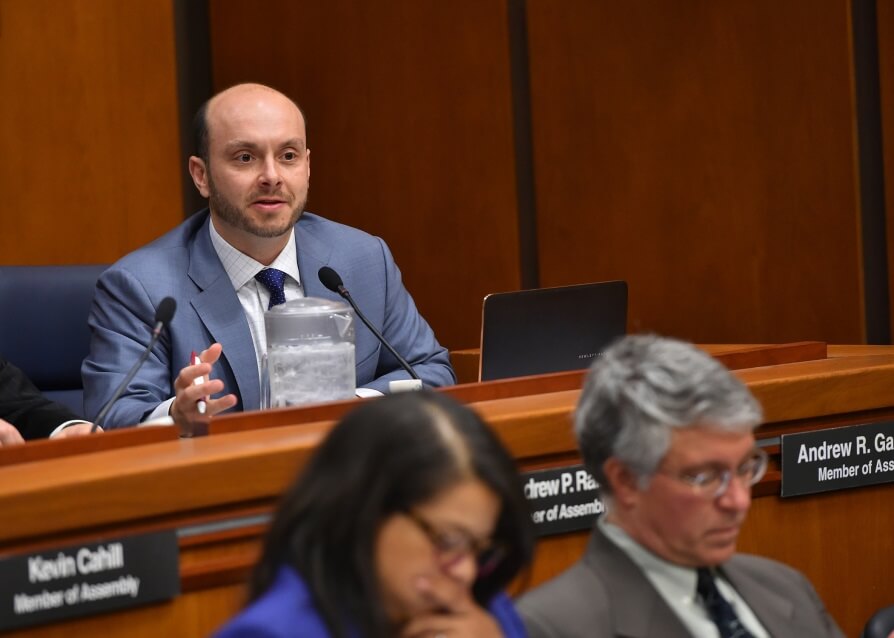 On the same November evening that Democratic Presidential nominee Joe Biden is expected to easily carry New York State, a Republican lawmaker with a consistent anti-LGBTQ voting record could escape with a victory of his own following a tight race to succeed retiring GOP Congressmember Peter King on the south shore of Long Island.

Assemblymember Andrew Garbarino, the Republican nominee for Congress in New York’s Second District, which also includes Fire Island, is one of several anti-LGBTQ GOP candidates running for House seats across the state, from Long Island to Staten Island to upstate New York.

Yet, while some districts are more reliably Democratic than others, Garbarino has a real chance: King managed to win 14 consecutive terms in office as a Republican.

Standing in Garbarino’s way is Democrat Jackie Gordon, a 29-year military veteran, former guidance counselor, and former Babylon councilmember who has out-raised Garbarino nearly three-to-one and is unleashing a barrage of TV ads promoting her military and education background.

Gordon has, on multiple occasions, expressed solidarity with the LGBTQ community throughout the course of her campaign. In June, Gordon praised the Supreme Court’s ruling that concluded LGBTQ workers are protected under Title VII of the 1964 Civil Rights Act.

“Discrimination against anyone based on their sexual orientation or gender identity is wrong — plain and simple,” Gordon wrote in a Facebook post. “Thrilled to see SCOTUS issue this historic victory for the LGBTQ community.”

There is good reason to believe that Gordon’s opponent would stand on the opposite side of that very issue of LGBTQ discrimination — which could soon come before lawmakers on Capitol Hill if Democrats regain power in the Senate and White House and work to pass the comprehensive LGBTQ non-discrimination bill known as the Equality Act.

Garbarino, as a member of the Assembly’s Codes Committee, also voted against legislation last year that banned wage differentials based on protected class status.

The Republican also has dark stains on his record surrounding numerous other issues, including reproductive rights and women’s rights. In 2015 and 2016, he voted against bills that would have protected the right to an abortion, and also voted four times — including as recently as last year — against the Reproductive Health Act, which codified Roe v. Wade protections in state law. Unsurprisingly, he voted against the Women’s Equality Act, a comprehensive measure that provides equal pay for women, bars harassment in the workplace, and more.

It doesn’t end there. Garbarino has also used his voting power as a lawmaker to keep racist practices in place. Last year, he voted “no” on a bill that outlawed race discrimination based on natural hairstyles — a measure that passed the Assembly by 130-10 — and in 2014, 2015, 2017, and 2018 Garbarino voted against an Assembly bill that “prohibits police officers from using racial and ethnic profiling.”

As if that were not enough, he voted numerous times against the DREAM Act, which gave undocumented students and some others the ability to receive state grants and scholarships for higher education.

Don’t expect Garbarino to mention those votes on the campaign trail. Instead, he has focused on painting himself as a fiscal conservative and running attack ads against Gordon, linking her to “Pelosi-Sanders Democrats” (Senator Bernie Sanders is an independent). Garbarino has also tried to corner Gordon on police accountability issues, saying she has “not come out against the ‘Defund the Police’ movement’” — an attack that could easily fall flat since Gordon served as a military police officer during her three-decade stint as a service member.

It appears the race lacks any public polling, but it is worth noting that turnout numbers during the primary elections were more promising for Democrats than for Republicans. Nearly 8,000 more voters participated in the Democratic primary compared to the Republican primary, and Gordon received 25,317 votes while just 17,462 turned out for Garbarino.

Furthermore, there already appeared to be warning signs for Republicans in that district. After King won his re-election bid by a 62 percent to 38 percent margin in 2016, he eked out a much narrower win in 2018 when he beat challenger Liuba Grechen Shirley by just six points, 53 percent to 47 percent.

While Garbarino is backing President Donald Trump and has been endorsed by King, Gordon has the support of New York Lieutenant Governor Kathy Hochul and Democratic Vice Presidential nominee Kamala Harris, among others. Gordon also secured the backing of the Human Rights Campaign and touted that endorsement in a written statement this past June.

“I am proud to have the endorsement of the Human Rights Campaign, and I look forward to standing side by side with them as we fight to build a more inclusive Long Island,” Gordon said. “I will always be a strong voice for the LGBTQ community in Congress as we continue to work towards a more equitable nation.”