Alejandra Caraballo Dreams of Shattering a Glass Ceiling in Brooklyn 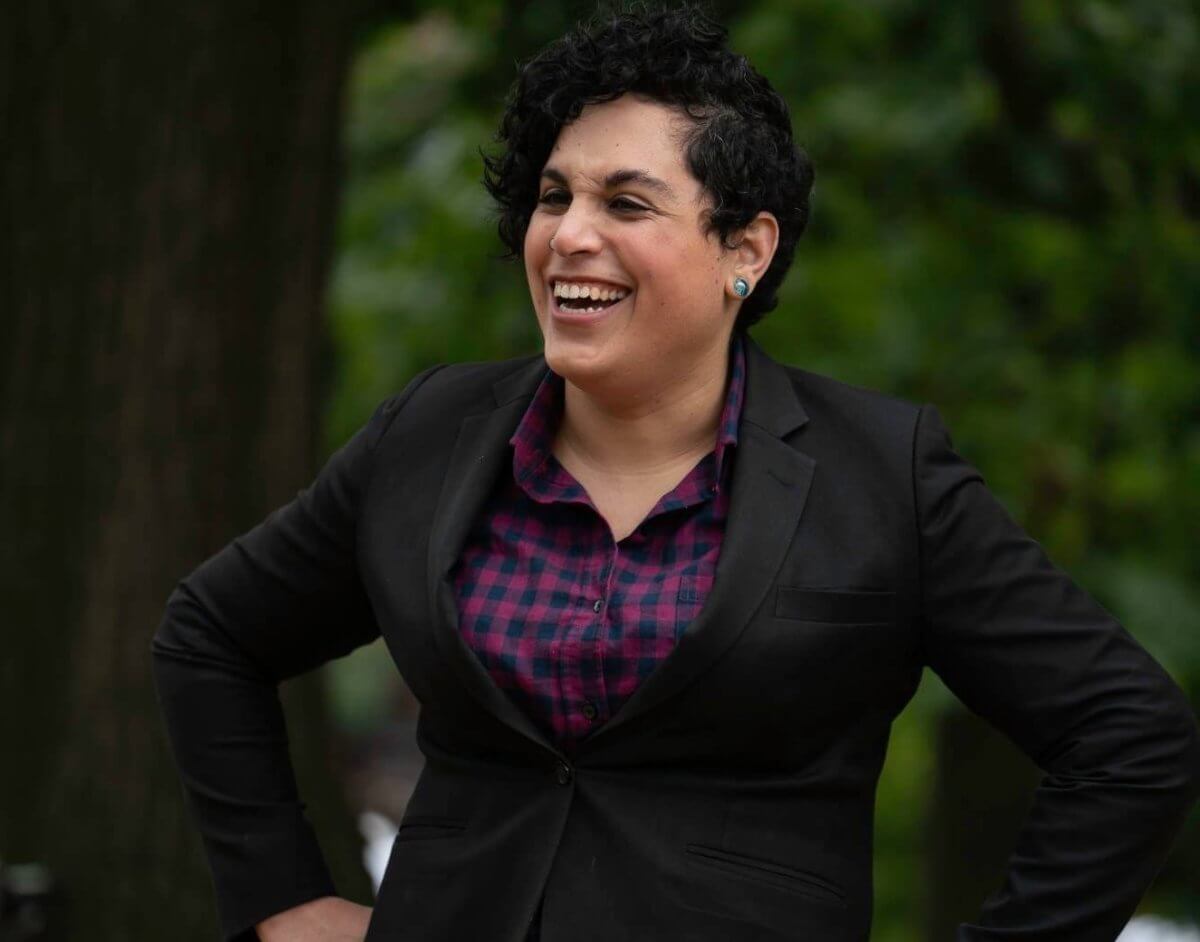 Alejandra Caraballo, an out transgender attorney for the Transgender Legal Defense & Education Fund, was motivated to launch a campaign for City Council next year in part because she has watched her clients endure the injustices of a legal system that seems so stacked against them.

She has heard stories of transgender individuals getting harassed and arrested by police officers for the crime of “walking while trans” — snared by a state loitering statute disproportionately enforced against transgender women. She has also seen trans undocumented immigrants — including many people of color — experience additional burdens when they are targeted unnecessarily by police officers and federal immigration officials.

Caraballo feels a sense of helplessness when she realizes that there are limitations to her power — no matter how well she defends an individual in court.

“I could represent my clients, but I couldn’t actually do anything to help change the system, at least as an attorney,” Caraballo said during an interview with Gay City News.

Along with Crystal Hudson and Terrance Knox, Caraballo is one of three out LGBTQ candidates of color running to replace term-limited City Councilmember Laurie Cumbo in Brooklyn’s District 35, which includes Fort Greene, Clinton Hill, Crown Heights, Prospect Heights, and Bedford Stuyvesant. A total of nine candidates have filed to run for the seat.

Caraballo is the only trans candidate in what has become a crowded race. In fact, her candidacy is tied to historic possibilities. If she is elected next year, she could become the first out trans lawmaker in New York State and would join out trans district leaders Emilia Decaudin and Melissa Sklarz as trans elected officials in the city. Other out trans Latinx candidates are also running in 2021, including Elisa Crespo, who is aiming to replace outgoing Congressmember-Elect Ritchie Torres in the Bronx in what will be a special election early in the new year.

Caraballo is no stranger to making history. When she was appointed to Brooklyn’s Community Board 9 last year, she was believed to be the first out trans person to join a community board in the borough. She has since become chair of its Housing Committee, and among other posts she has served on the board of the Translatinx Network and as secretary of the LGBTQ Rights Committee of the New York Bar Association.

She is also on the executive board of Lambda Independent Democrats of Brooklyn (LID), an LGBTQ poltiical club that is making an endorsement in the race for the 35th District — as well as the races in three other Brooklyn districts — on November 19.

Caraballo is making progressive politics a central theme of her campaign and she envisions a Council that can make a difference even on issues that largely seem to be outside of the jurisdiction of city lawmakers. While the discussion surrounding single-payer healthcare has been a key issue at the federal level and in Albany, she feels the Council can help by bolstering the NYC Care program, which provides low- and no-cost health services to New Yorkers who cannot afford health insurance coverage. She also would like to work with federal lawmakers from the area to address disparities in accessing mental health services.

A key factor in improving those necessary services for New Yorkers is funding. To that end, Caraballo’s campaign platform calls for reducing the NYPD budget by at least $2 billion, and she is stressing the importance of bringing genuine cuts to the department rather than shifting police work to other agencies. But more importantly than that, she said, it is imperative that the focus should not be narrowed down to simply reducing the police budget.

“It’s about funding the people,” Caraballo said. “It’s about moving that funding away to empower rather than incarcerate… to attack the root of crime, which is social problems, rather than carceral operation where we just lock people up.”

During the summer protest movement over police violence against communities of color, Caraballo endured a traumatic experience of her own when she said an NYPD vehicle sped by protesters and nearly hit her. That close call, she said, triggered her chronic post-traumatic stress disorder and forced her to go back on medication for depression and anxiety.

Caraballo was unhappy with the budget passed by city lawmakers over the summer and took a direct shot at Cumbo, who voted for the budget, for comments she made during the protest movement as well as her role in passing a budget that Caraballo and many activists said did not bring meaningful change to police funding. Caraballo charged that Cumbo was behind the Council’s sudden reduction in discretionary funding for councilmembers who voted against the budget, including out gay Brooklyn Councilmember Carlos Menchaca, who is running for mayor.

Criminal justice reform is also embedded in Caraballo’s approach to LGBTQ issues. She would like to repeal section 8-131 of the Human Rights Law because she said the law exempts the NYPD from being subjected to it in most cases.

“If the NYPD is using racial or homophobic slurs, they cannot be held accountable by the Commission on Human Rights,” Caraballo said.

Caraballo, a strong backer of the movement to decriminalize sex work, hopes to see the Council push forward with a resolution encouraging the state to repeal the “walking while trans” loitering law. Caraballo underscored the wide-ranging impact current laws have on sex workers, noting they often cannot qualify for government assistance due to the nature of their work and find themselves having to turn to mutual aid options to survive.

Locally, Caraballo is sounding the alarm on land use issues in her district. Caraballo criticized Cumbo for approving the Bedford-Union Armory project and she took issue with a proposal that calls for new buildings that would cast shadows over the Brooklyn Botanic Garden. That project has sparked widespread community opposition, Caraballo noted, but locals have felt ignored.

“Unfortunately, the community feels they have no leverage with the current political representation,” Caraballo said.

And while Caraballo praised one of her opponents, Hudson, for her dedication to the local community, she struck a more critical tone as she recalled that Hudson previously worked for Cumbo.

“I disagree with [Hudson’s] work for Cumbo for so many years,” Caraballo said. “Cumbo is the one who is detested and disliked. For me, I have questions about her decision to work with her.”

For now, Caraballo said she does not have anything to say about her other out LGBTQ opponent, Knox, but no matter the competition, she emphasized that she is proud that three LGBTQ people of color are running for the seat.

“I think it’s a testament to how far we’ve come,” she said. “That’s amazing. I don’t think anybody would have even thought this would happen even a decade ago.”

Being the only trans candidate in the race, of course, holds its own significance, and Caraballo said she is driven to reverse the erasure of trans representation in the political world and elsewhere. As she embarked on her campaign for City Council, she thought of the late Lorena Borjas, a beloved Queens-based trans activist and community leader who offered robust support to trans folks, sex workers, and others. Just as Bojas paved the way for others, Caraballo hopes her candidacy can help continue the process of building that change.

“It’s about showing you can be a trans person and be whoever you want,” she said. “You can run for City Council and be taken seriously. I see cracks in the glass ceiling.”