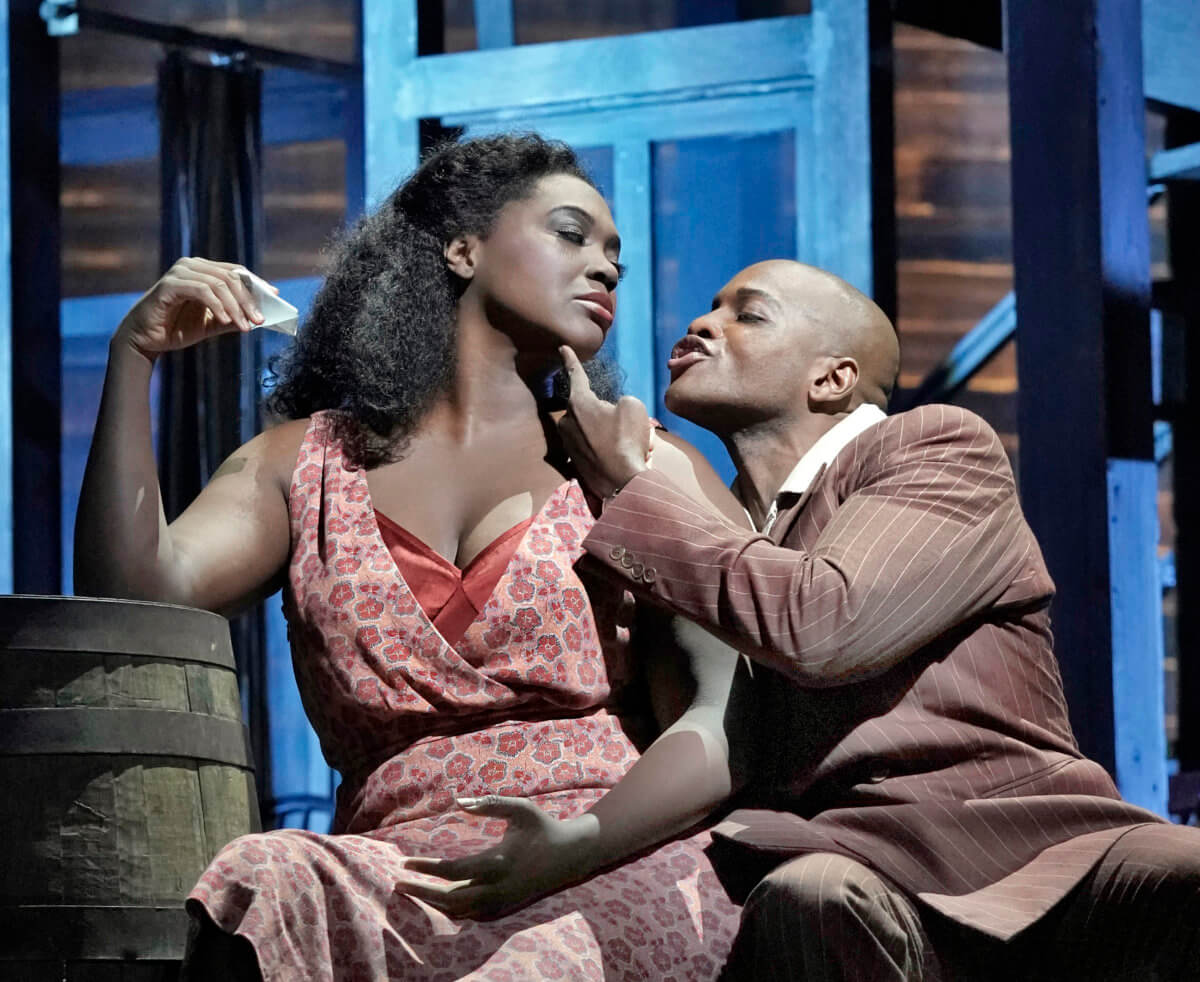 Frederick Ballentine is on a roll. On Halloween, the talented, engaging gay tenor returns to the Metropolitan Opera’s smash-hit production of “Porgy and Bess” in the flashy role of Sportin’ Life, which has fast-tracked him to leading parts in a few short years.

Just over 30, Ballentine has played the opportunistic, hedonistic character to the hilt at Glimmerglass, in Cincinnati, Amsterdam, and London, as well as for his acclaimed Met debut on Opening Night 2019. Raised in Richmond, Virginia, he attended a performing arts high school that has produced many Broadway and opera talents. He also completed a young artists program (and had small roles) at Washington National Opera. After a few months of lockdown in DC, Ballentine upped and made his home in Berlin, his “happy place,” coping with jet lag on his return and looking forward to what he describes as an extraordinary onstage and backstage Met Porgy family.

GCN: So that 2017 Glimmerglass show was your first Porgy?

It was great but also so stressful! We Black artists have an obligation to uphold Black culture, and Porgy is bound up in that — it’s given so many people careers. A Porgy ensemble is an incredibly supportive family, but being onstage and knowing that everyone has done their part five times and you’re new is a lot of pressure! At the Met, Camille [A. Brown]’s choreography for the dancers is so physically intense that I don’t think I could rise to that level. But Camille did work with me, giving me nuances for my way of interpreting the character. I got some flak for this in reviews, but while everybody else is being very realistic, my movement as Sportin’ Life takes him away from that: very stylized, almost vaudeville. Camille helped me find those magical moments: how to make the turn of the hat into something bigger.

“Struttin’ Style” with Maria — with Denyce [Graves] — is always awesome. A lot of my favorite moments onstage are parts when y’all aren’t even looking at me! When all the others are playing craps center stage, I’m having a good old time with Angel Blue (Bess); we’ve been told to tone it down (laughs). Later in the show ([when] Sportin’ Life is so shameful to Bess, he doesn’t even look at her as a human being) I love how my interactions with Angel’s Bess can be so snaky. And Angel responds to it! Plus, any time I’m onstage together with Latonia [Moore]…we cannot help but trying to one up each other. We’re that close.

GCN: He’s an outsider in many ways. What’s his sexuality, if any? Does it matter to you in performing it?

It matters to me that I relate to every character as much as possible. This was my first leading role, and I decided his sexuality has to be fluid. In my mind, he’s a city boy who got into trouble up north and decided to make his way down south with as many drugs as he could take. Sex doesn’t mean anything to him. He’s trying to get cash together the whole show, and if he can bring Bess as a sex worker back with him, that’ll settle the future. If he could bring a man back as a sex worker and had to sleep with him in order to win him over, he’d do it. Attraction isn’t his priority: money is his priority! People have gotten up in my face on Insta and Facebook about playing him. Someone even asked how could I do “a minstrel show” — so demeaning to our people.  There’s always a double-edged sword when you’re talking about “Black” opera with a white composer and librettist. But who’s telling the story? I am — we are —onstage. Any leg up for people of color in this profession is a good thing. This gets the young voices out there to be heard. For better or worse, Porgy is one of the great American operas: The music is stunning, the story is heart-rending, and it’s going to be around for a long time. And that fuels the effort now to create new works and tell our stories in a way that we would actually tell them; I am praying I get a ticket to see Fire Shut Up in My Bones!

GCN: What are your dream roles?

FB: I just came from doing the Drum Major in Wozzeck in Kassel—some of the wildest and craziest shit I’ve ever done onstage, kind of a macho, hypermasculine poster boy. I get to wear this muscle-T and show off my body, I get to be as vain as I want to be! (Laughs) That’s my stuff, the German repertory! Soon I’m doing Max in Der Freischütz–kind of the German anthem of opera–and Loge in Das Rheingold. I’d love eventually to do other Wagner, Erik and Siegmund. Not in the German rep, but Britten’s Peter Grimes: I need to find a way to do it. And his Turn of the Screw is so creepy and beautiful, I would love to do Peter Quint.