Queer Ukrainians Band Together in the Face of War 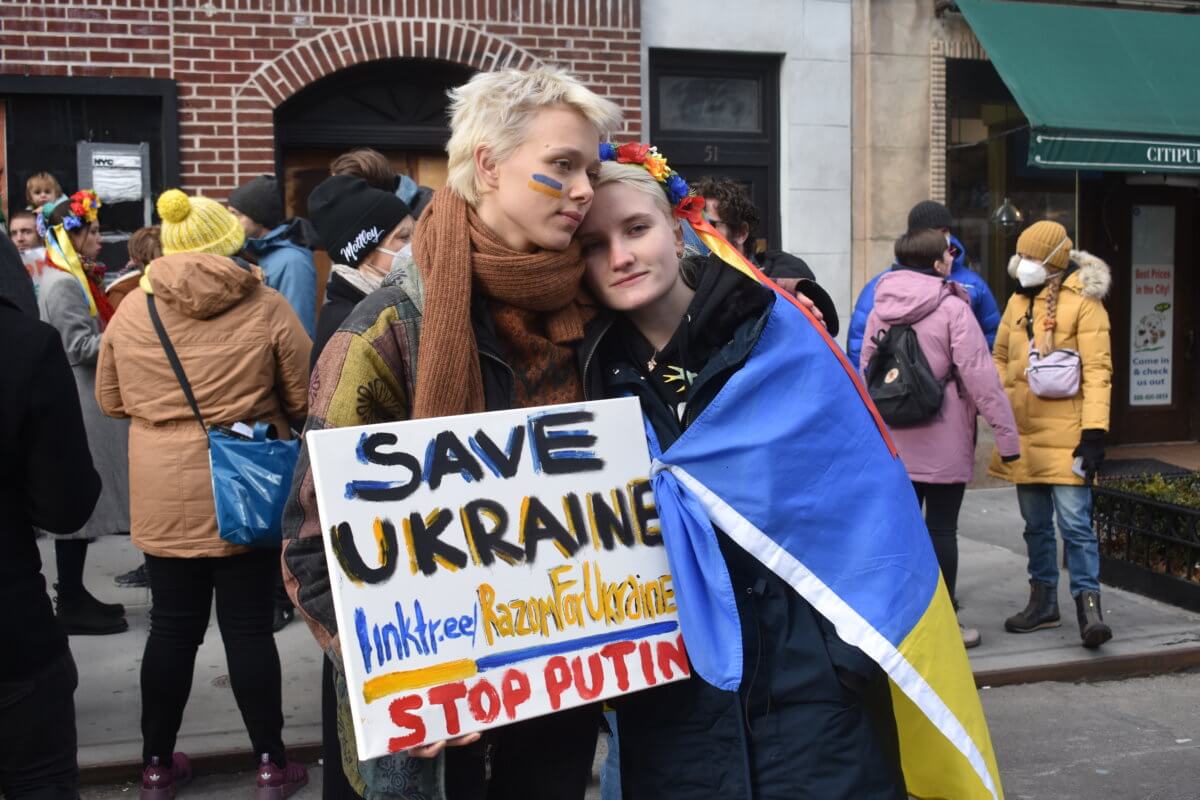 Ivanna Sakhno and Polina Buchak, both from Kyiv, hug at the Stonewall Inn on February 26.
Matt Tracy

Hours before Russian President Vladimir Putin declared war on his western neighbor, out gay Ukrainian soldier Viktor Pylypenko summed up his own feelings in one word: “Anxious.”

Pylypenko has played a major role as an LGBTQ leader in Ukraine, where he leads a group of more than 100 queer troops and veterans. He told Gay City News he served in active combat in 2014 during what he described as a brutal, grueling stretch of warfare when Russia annexed Crimea and aided separatists in Ukraine’s eastern region.

Pylypenko has since rejoined the military to defend his nation and save the LGBTQ community from Putin’s persecution.

From Kyiv to New York City, LGBTQ Ukrainians are standing up for their independence. Queer Ukrainian activists in New York City hosted a solidarity demonstration outside the Stonewall Inn on February 27, while their LGBTQ friends back at home are speaking out about the perilous situation on the ground as Russian forces bombard the nation with support from Belarus.

A combination of energy, emotion, and Ukrainian pride engulfed the area surrounding Stonewall on Christopher Street Saturday afternoon. Signs in the crowd overwhelmingly targeted Putin, with some comparing him to Adolf Hitler and others featuring messages such as “LGBTQ United Against Putin.” Many attendees also brought signs expressing general opposition to war.

The protest was led in part by Bogdan Globa, an out gay activist who founded QUA, an organization dedicated to LGBTQ Ukrainians in the United States. Members of RUSA LGBTQ, an organization of Russian speakers, also showed up in support.

“We’re here to show solidarity for Ukrainians because there is a war going on,” said Globa, who said his loved ones back in Ukraine are hunkering down in shelters. He said many folks have been unable to leave Kyiv because the war has halted public transportation.

Polina Buchak and Ivanna Sakhno, who both hail from Kyiv, embraced each other as they watched the demonstration. They were draped in a large Ukrainian Flag.

“Not surprisingly, everyone back home is terrified because at this point, we will never know when the next shelling is going to happen,” Buchak said. “Hopefully we will stop losing people — innocent civilians — because you can understand how terrifying it is. Sometimes there are not enough words to explain the emotions.”

Back in Ukraine, queer people are pouring their hearts into the campaign to repel Russia’s advance. Pylypenko — known as the first out gay person in the country’s military — sounded the alarm about an American intelligence report warning that the Russians drew up a “kill list” targeting LGBTQ activists in Ukraine.

“People are really scared that if the most dark prognosis will take place,” said Pylypenko, who is from western Ukraine and lives in Kyiv. “The first thing Russia will do is rid civil society of activists — especially those who belong to the LGBTQ community and who are fighting for human rights. Human rights are the number one enemy for Putin’s regime.”

Pylypenko and others said those fears are rooted in Russia’s treatment of LGBTQ people in war-torn eastern Ukraine since 2014. Kyrylo Samozdra, another gay Ukrainian man, told Gay City News he fled from the occupied eastern Ukrainian city of Luhansk in 2020 after he was interrogated and harassed by Russian authorities for his work with queer youth. LGBTQ Russians have often reported similar tactics used by the Russians to clamp down on public queer life.

Samozdra escaped to Kyiv and is now in the western Ukrainian city of Lviv, where he said he has heard numerous explosions since Russia launched the invasion. He feels safer now after getting in touch with a group of queer people.

“We went several times to shelters,” Samozdra told Gay City News. “It was hard when we had just arrived from the train. We didn’t sleep for 30 hours and we were forced to sit in the basement, but now everything is calm. With my queer acquaintances, we exchanged news, helped, and consoled each other. I see this war as a war of humanity and inhumanity. I am happy that the entire world has rallied against Putin and is helping Ukraine.”

“A lot of LGBTQ people are scared and afraid because they’re one of the first groups targeted by the Russians,” Globa said.

Pylypenko and Globa acknowledged that Ukraine still has much more progress remaining in the fight for LGBTQ rights, but they hailed the work underway to foster a more inclusive society. In 2015, Ukraine’s parliament voted to implement anti-discrimination protections on the basis of sexual orientation and gender identity. Men who have sex with men have been allowed to donate blood since 2016.

Like many places in the United States and elsewhere, Globa said cities like Odessa and Kyiv have gay bars and clubs, while rural areas tend to be more conservative. His mother, who remains in Ukraine, founded an organization for LGBTQ parents in the country.

Pylypenko, meanwhile, said he was widely embraced when he came out following his first stint in the military — and he knows trans troops who have found acceptance.

“As defenders, we had a high level of respect from civil people, so they easily could accept our second identity — our gay identity — and through that, we created an umbrella for the whole LGBTQ community,” he said.

The strong sense of national pride has become a main theme for a country that has united under President Volodymyr Zelenskyy, who has called on citizens to take up arms and defend against the Russians. Globa and Pylypenko said people in Ukraine have been undergoing self-defense training — and images circulating on social media have shown citizens preparing Molotov cocktails to fend off enemy forces.

Putin’s rhetoric has intensified at a time when the Russians have encountered fierce resistance from Ukrainian forces during the early days of the invasion. The Russian president has twice issued ominous warnings to the west, boasting of his nation’s nuclear capabilities, but that has not deterred Ukrainian citizens.

“Members of the LGBTQ community are already at war fighting on battlefield,” Pylypenko said. As his nation was under siege on February 25, Pylypenko told Gay City News Ukrainians have scrambled to enlist in the military.

“The number of people willing to defend the country is immense,” he said. “Our brigade has enormous queues. We waited two days for our documents, uniforms, equipment, and weapons.”

LGBTQ Ukrainians who are not fighting have been raising money, aiding in medical efforts, and preparing items for soldiers at war, Pylypenko said. He urged other countries, including the United States, to continue supporting Ukraine.

Out gay State Senator Brad Hoylman of Manhattan — who was one of the speakers at the Stonewall demonstration — said New York State can help Ukraine at the state level by targeting Russia’s wealthy elite.

“The way we get to Putin is to go after the oligarchs here in New York City,” Hoylman said. “On Monday I am introducing legislation in Albany that is going to expose all of those secret limited liability corporations.”

While many countries are imposing sanctions on Russia and Belarus, others are sending weapons to Ukraine — and the Biden administration said it would provide an additional $350 million in military aid. Ukrainians know, however, that they are otherwise fighting the war on their own because the country is not a member of the North Atlantic Treaty Organization (NATO), which stipulates that an attack on one member is an attack on all. Russia has long warned against Ukraine’s inclusion in NATO.

“Our unity is our main instrument,” Pylypenko said. “We don’t have any foreign troops in Ukraine; we only have our local army. We are ready to accept any challenges.”