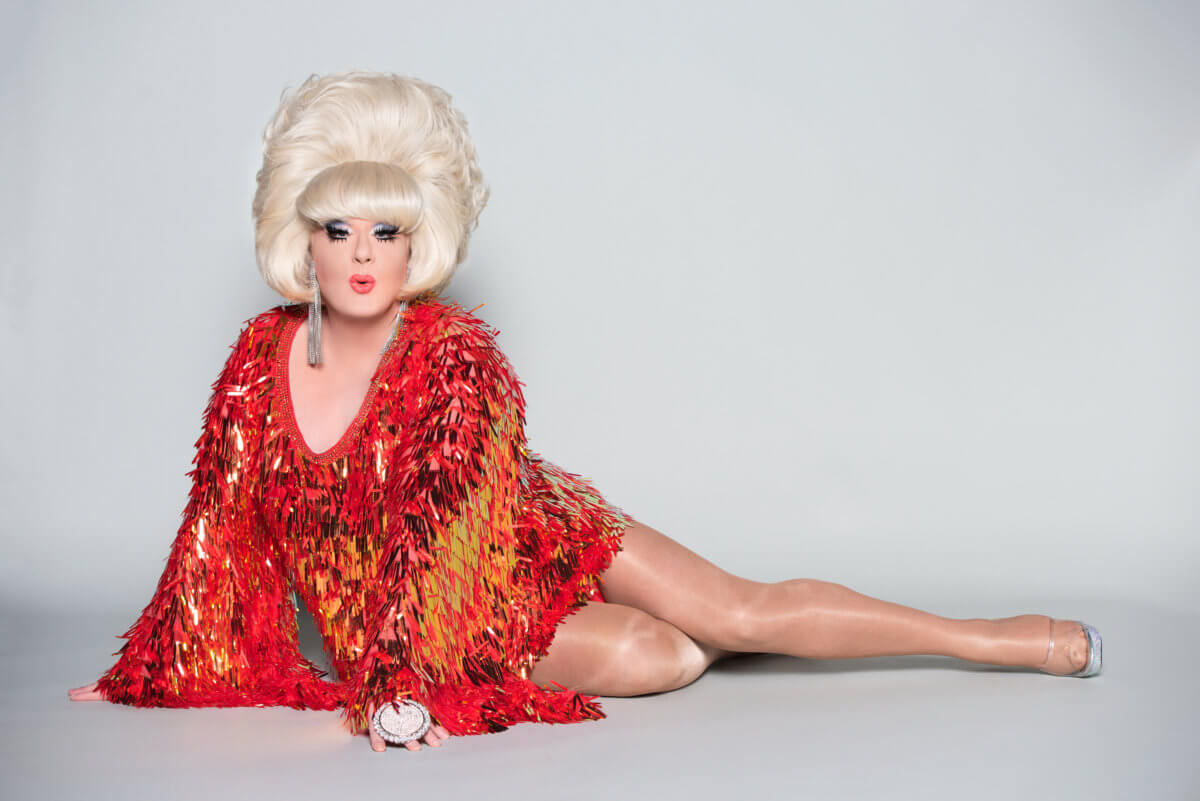 Lady Bunny is happy to be back on stage after enduring the COVID-19 shutdown.
Just Toby

Lady Bunny has been working the New York drag scene for decades. In fact, the drag doyenne helped forge the scene at Pyramid Club in the East Village during the 1980s, along with a bevy of beauties like Linda Simpson, Lahoma Van Zandt, and the now-megastar RuPaul. But whatever you do, don’t quip about her age or longevity — only she can joke about that.

I found out the hard way during our chat about her latest show, “Oh Come All Ye Hateful!” now running at the Laurie Beechman Theater in Times Square. When I suggested she’s been around forever, she told me to “Watch it!” in her lilting, Tennessee-tinged accent. Pretty sure she was only half joking.

Which is one of the keys to her longstanding success as a drag artist. The diva deftly coats her insightful barbs in a glaze of honeyed charm to make them go down easier. And her new show is especially naughty, chock full of raunchy humor that tenderhearted souls might find offensive. You have been warned.

The curvaceous jokester, known for her ginormous blonde bouffant and caustic wit, truly is a living legend. Not only a regular at Pyramid, she also founded Wigstock, the raucous outdoor drag-fest in nearby Tomkins Square Park that ran for over 20 years. She has graced the stages — or in some cases, bar-tops — of countless venues like Boy Bar, Roxy, Limelight, and Barracuda. Plus, she’s a popular DJ, spinning upbeat tunes known for their kitsch factor rather than artistic merit.

During our recent interview about her storied career and coping with COVID-19, the drag icon was on fire, punctuating her jests and jibes with infectious, cackling laughter. It felt like I was getting my own personal impromptu show. The following interview has been condensed and edited for clarity.

David Kennerley: First off, congrats on rebounding after a dicey lockdown. Between “Oh Come All Ye Hateful,” Fort Lauderdale Pride, a holiday show in Grand Rapids, and your upcoming UK tour, you seem to be firing on all cylinders. How does it feel?

Lady Bunny: I’m thrilled to be on stage again because I love to work and I love to travel. Right now, performers are booking dates as if there will be no future COVID issues, but that is uncertain. And that’s why I wanted to do a bunch of gigs. If I have to hole up later this year and eat peanut-butter-and-banana sandwiches and write a book, I will have stashed a few coins.

How was it during last year’s lockdown?

I’m not one of those extroverts who doesn’t like to be alone. That said, the lockdown was rough because I am a people person. And the only way I was able to safely socialize was to, weather permitting, go for a walk down to the [Hudson River] piers with Flotilla DeBarge or someone like that. I definitely missed people. Performing online is definitely not the same, no, no, no.

What was the worst part of lockdown for you?

Eating so much to console myself that I got pre-diabetes, which is actually a risk factor for COVID. So that was an ugly circle. And with my legs, I can’t lose one because that’s all I’ve got. I ain’t got no titties, there’s no waist, there’s no booty, there’s no neck. Please don’t mess with the legs, honey!

You performed an online show called Cuntagious since the onset of the pandemic. Did you do other virtual performances?

I did one called Hateful Hags Network, with Bianca Del Rio, which was like a news show. And you know, especially with comedy, it’s super tough without an audience. We thrive on responses from the crowd. Whether you’re playing up to one table that is especially loud, or you’re going on a rant and the audience is either giving you the approval or the disapproval that they want either more or less. It’s tricky.

What else did you do to keep yourself sane and busy during that time?

I had an exercise bike delivered and got on it once, but that’s definitely gonna change this year. I got one with a table where you can put your laptop or whatever, or watch TV. I quit the gym because of COVID.

I do enjoy cooking, but perhaps I’m too good of a cook. I miss sex — I haven’t been daring enough to do that because I’m in a couple of high-risk groups. I was such a slut for so many decades that I can easily afford to take some time off and let the scabs heal, you know? Believe it or not, some people have been looking my way lately and it is tempting, but I’m at an age where the juices aren’t flowing like they used to.

And as much as I bitch about social media, it was a lifesaver for me and many others because it could connect us. I mean, it should be critiqued and a lot of people on there who you’re conversing with daily have a profile picture of a cat. You never met them and you never will. And they’re not gonna bring you any soup when you’re sick. So are you ignoring the people in your life who might bring you soup, and who you would bring soup to? That’s not too smart in my view, but I’ve clearly been around eons before social media and the internet were a thing.

Tell me about “Oh Come All Ye Hateful!” Can you explain the title?

Well, sometimes I get a little bit sick of drag queens who are all about rainbows and lollipops, because my character is a twisted, often raunchy nut. I’m not trying to be a role model, I’m trying to make people laugh. And yes, my humor is often vulgar. But if you think about it, what isn’t hateful these days? Some friends like to joke that when someone comes up and says “hello” we reply, “That’s hate speech!” … Meaning that it’s killing every illusion that we thought we might be able to muster, by exposing everything from our contour to our razor bumps.

I understand that the first batch of shows sold out so you added more. Was it a surprise they sold out so quickly?

Why should that be a surprise? Look, people are ready to go out and have some fun. There’s lots of new stuff in this show, but I also deliver some Christmas classics. The reason I like doing Christmas shows is that it’s the opposite of the wholesome religious Christmas. So I’m able to goof on that. I’m one of those gays who knows that religion is often used against my people as an excuse for bigotry. So I’m not one to seriously uphold religious traditions. In fact, my favorite holiday is Thanksgiving because there’s no religion attached to it.

You perform musical parodies, like “Rudolpho the Uncut Reindeer.” Do you write all your own lyrics?

I write a lot of them. I worked with Beryl Mendelbaum and Divine Grace, both very talented writers. But there are also some spoken bits like a demented version of “‘Twas the Night Before Christmas,” a very funny year-end roundup, and some surprise deliveries, which I can’t say or it won’t be a surprise. Not that I only parody Christmas songs. There are a few pop parodies too, because people are gonna slit their wrists if they hear too many Christmas songs. I am butchering these songs and turning them into twisted tales which are quite filthy. I am very naughty this year!

The late 1980s and early 1990s was a particularly fertile time for queer nightlife in NYC. Do you have any fun memories of that time?

We were paid to go to football stadium sized clubs like the Roxy, Tunnel, and Palladium, to hang out, meet guys, and hand out free drink tickets. With Amanda Lepore and RuPaul and Kevin Aviance and all — it was a different experience back then. Now [nightlife] is much more related to bars. I’m a big girl and my scale is not really suited to a smaller venue. I need room to twirl around.

I’m not gonna dress up in five wigs to go sit with people at the corner bar who just got off work. I miss that old club scene, when we were like, Louis Vega and David Morales and Frankie Knuckles are spinning tonight and we’re dressing up and going to five, six clubs and make a real night out of it. I miss the glamour, which is not to say that there aren’t glamorous special events today. The Glam awards are coming up, with Bob The Drag Queen hosting. But there are no more of those megaclubs. I’m a clubby person. It took a long time for me to become comfortable doing the cabaret scene, cuz I’m used to the mayhem.

I have a program from the 1991 Wigstock, the year it was in Union Square. You wrote this clever think piece on respecting the earth and asking folks not to litter or step on the lawn with their high heels. Does this ring a bell?

Oh, yes. That was one of the conditions under which we got to use the park. It had been a needle park… and then fancy condo buildings were built and the new neighbors cleaned it up. That year there was a drag queen very bitter about not being booked, and to retaliate, she showed up in drag and a megaphone and trampled all the flowers surrounding a statue. Just to get back at me. And the crowd immediately took up a collection, with no urging from me, for the several hundred dollars needed to fix it. That was quite extraordinary.

How do you feel about performing in front of a live audience, with all the news reports of a possible winter surge and new variants like Omicron?

I love what I do and it’s the risk I’m willing to take. I’m up on stage with no mask in a room with sold-out audiences. But I’m a little distant from them and they’re vaxxed and there’s good ventilation. I want to do this as safely as possible for me and for the audience. I wanna spread my infectious humor, not Omicron.