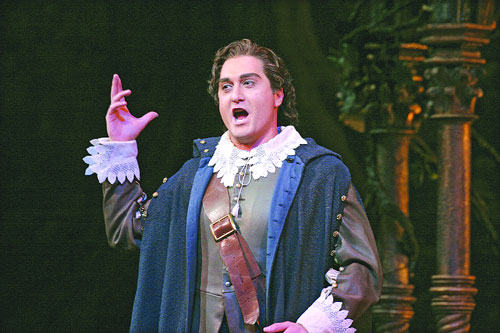 Nicolas Joël’s production of Donizetti’s “Lucia di Lammermoor,” perhaps more than any other in the Met’s repertory, exemplifies what many term “museum opera” and I think of as the “Classic Comics” approach—big, expensive-looking yet unimaginative settings, in this case by Ezio Frigerio, which hem the drama in by requiring long set changes and essentially dwarfing the cast members. It is worth recalling that this monumental, soporific 1998 production was conceived to replace and counter the out-there, coffin-strewn 1992 staging Francesca Zambello gave the house.

Zambello, even at her less than best—and her best, as represented this past month by “An American Tragedy,” is pretty stunning—at least brought a point of view and some visual drama to “Lucia.” The finest aspect, visually, of the current staging is the costuming by Franca Squarciapino; but the stage director of this year’s revival, Zoe Pappas, deserves credit for putting on a logical show within the confines of the sets—no one did anything illogical, and the tricky entrances and exits in the Wedding Scene were better handled than in the past.

What got me in the door December 30 was the chance to hear Giuseppe Filianoti sing his sixth Met performance. The 31 year old Calabrian tenor made his debut opposite first-cast Lucia Elizabeth Futral October 26 with no publicity and almost no expectations—a stark contrast to the ballyhoo that has accompanied most of his fellow tenors in the last few years of recording company desperation to find—or, if need be, produce—a “fourth” tenor to take the public’s mind off of the hype generated around the joint ventures of José Carreras, Plácido Domingo, and Luciano Pavarotti.

Filianoti wields the genuine article, an excellent lyric Italianate voice, used at once with taste and passion. A handsome man in an old fashioned, Italy-between-the-Wars kind of way, he looked as Edgardo a bit like a grown-up Elijah Wood and moved with spirit and sense, if not overriding conviction. He does not seem the kind of operatic performer to tear a passion unduly to tatters, as Marcelo Alvarez and even the extremely intelligent Rolando Villazón do on occasion. More crucially, barring an occasional veristic glottal sob, Filianoti handled both text and music with stylish sensitivity, and never gave the impression of a tenor trying to show in lyric music that he is a potential spinto or dramatic. Some of his fellow Italian tenors’ careers seem lifelong auditions for heavy lifting parts like Calaf.

It is to be hoped that, whether he gets swept up by recording company hoopla or not, Filianoti will spend many future seasons in New York. There are still three chances to hear him this season, in what must be another excellent Donizetti role for him, Nemorino in “L’elisir d’amore” on May 13, 17, and 20.

It’s always exciting to have a performer exceed one’s expectations. My previous exposure to Korean soprano Youngok Shin was in comic soubrette roles in which she let cutesiness prevail. Hers is a very pretty if small voice; but she made an attractive, serious and highly sonorous Lucia, notable for fluent phrasing, very good trills and sensational accuracy in the Mad Scene’s famous cadenza. Here she even wowed the coughers into silence. Shin certainly doesn’t command the cutting power or blazing top notes of a Joan Sutherland or Mariella Devia; she either floated the highest tones or placed them very narrowly, flicking those famous E flats into place.

I found Shin’s Lucia more interesting musically than those of Futral—a so-called “total package” artist who for me rarely transcends generalities—or of Ruth Ann Swenson, who premiered this staging. Shin deserved her prolonged ovations.

Several critics and listeners, myself included, have heard in the small parts heretofore done by the Met’s Young Artist Charles Taylor the promise of a big-voiced Verdi baritone. Here, with Enrico, a role looking forward to some Verdian characteristics but more lightly orchestrated, Taylor sounded in some trouble—blunt and choppy of phrase and short of breath. The essential quality was pleasant at the top, less distinct in the middle, suggesting more Puccini’s Marcello than the “Ballo in maschera” Renato he is slated to sing in Europe this year. Taylor may just have been suffering from an unannounced cold, but I hope he isn’t being tracked on to heavy Verdi just because he personally is a heavy guy. This kind of “looks casting” can be just as pernicious as the more common “babe factor.”

Hao Jiang Tian started with a loose vibrato, but warmed up as the opera progressed; some of his Raimondo was quite impressive. His bass, expansive on top, vanishes at the extreme bottom. The two key smaller roles were in very capable hands—tenor Garrett Sorenson shone once again as the hapless official fiancé Arturo, a good test role for leading tenor potential; and mezzo Edyta Kulczak, who always seems to be in good voice, proved a strong, welcomely young-sounding confidante. Edoardo Müller, if occasionally lax of tempo, supported his singers with style. Besides Shin’s cadenza with flute and Filianoti’s admirable traversal of Edgardo’s heartbroken final scene, the evening’s high point was principal harp Deborah Hoffmann’s ravishing playing in the Fountain Scene—an elegant bonus to this surprisingly rewarding “Lucia.”