By Heather Cassell
comments
Posted on May 17, 2022 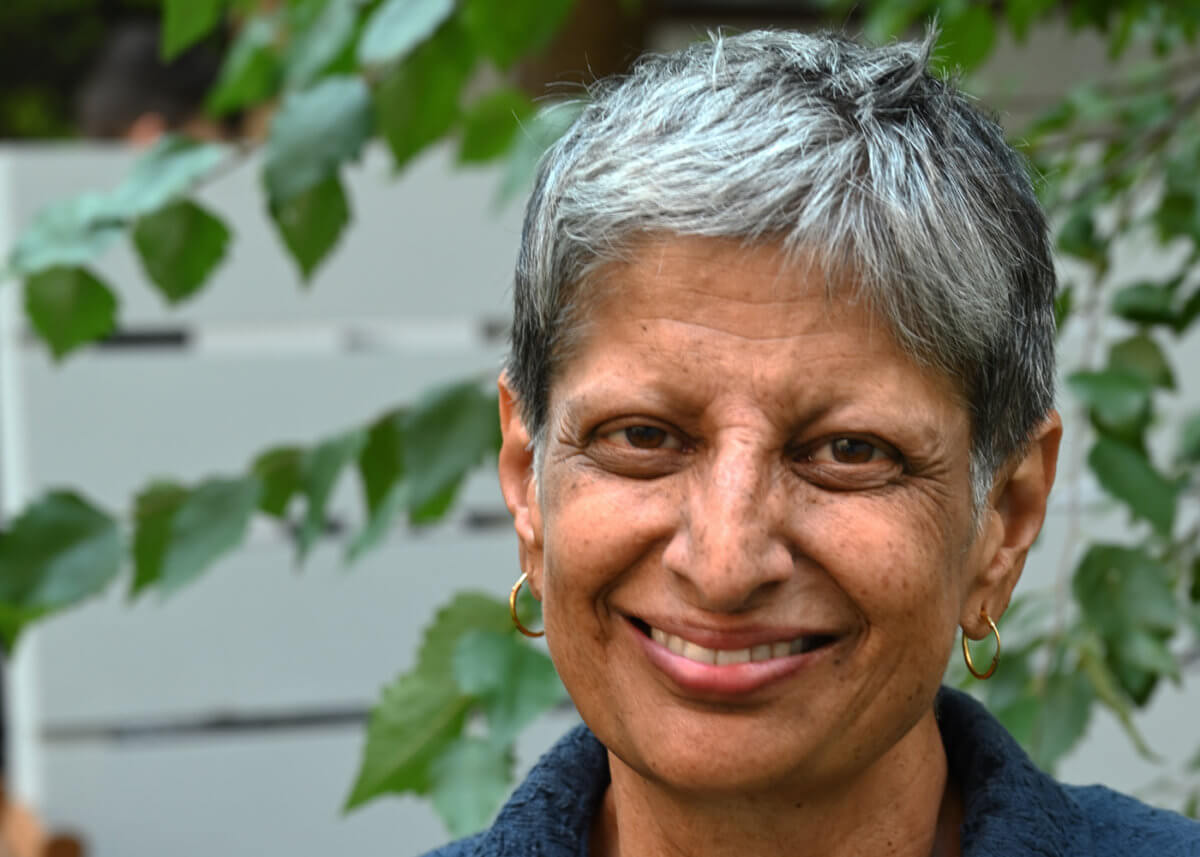 Vaid, 63, died at a New York Hospital on May 14 after suffering from cancer, according to people close to her life partner of 33 years, Kate Clinton. Clinton declined to comment.

The National LGBTQ Task Force announced Vaid’s death in a news release around 5:45 p.m. Eastern Daylight Time on May 14.

From 1989 to 1992, Vaid was the first woman to serve as executive director of the Task Force. Prior to taking the helm, she served as its media director and in other positions at the organization. Vaid also co-founded the Task Force’s annual Creating Change conference, now in its 34th year.

One of Vaid’s most memorable activist moments was when she disrupted former President George H.W. Bush’s 1990 press conference on AIDS when she held a sign saying, “Talk Is Cheap, AIDS Funding is Not.”

In 1995, she published her first award-winning book, “Virtual Equality: The Mainstreaming of Gay and Lesbian Liberation.” She also authored “Irresistible Revolution: Confronting Race, Class and the Assumptions of LGBT Politics” (2012) and co-edited the anthology “Creating Change: Public Policy, Sexuality and Civil Rights” (2000) with John D’Emilio and William Turner. She was a columnist for the Advocate magazine and published many articles and essays.

Vaid went on to found, co-found, lead, and serve on the boards of other organizations and political action groups, such as the Arcus Foundation (2005 to 2010). She also served as deputy director of the Governance and Civil Society Unit of the Ford Foundation (2001 to 2005).

She was instrumental in co-founding the Donors of Color Network, the National LGBTQ Anti-Poverty Action Network and the National LGBT/HIV Criminal Justice Working Group at the National Center for Lesbian Rights, the Equality Federation, and the National Religious Leadership Roundtable. Vaid also served on the board of the Gill Foundation (2004 to 2014). She launched LPAC (2012) and National LGBTQ+ Women’s Community Survey. She was influential in the early work behind the forthcoming American LGBTQ+ Museum and served as a founding board member.

Among other posts, Vaid was president of the strategic and social justice consultancy firm Vaid Group.

Born in New Delhi, India, on October 8, 1958, Vaid immigrated with her family to the United States in 1966 when she was seven years old and settled in upstate New York. She found her political activism in her pre-teens and honed her community organizing skills at Vassar College. She earned her law degree at Northeastern University School of Law and launched her career as a staff attorney at the National Prison Project at the American Civil Liberties Union.

Queer South Asian activists recalled the importance Vaid represented to the community in the United States and in India as an out and proud lesbian activist.

“Today, our community has lost a giant. She made us so, so much better,” LGBTQ Indian-American activist Neena Hemmady wrote in a Facebook post.

“Urv was the fire and the brains and the heart behind countless things,” Hemady wrote.

Kenrick Ross, executive director of the National Queer Asian Pacific Islander Alliance, agreed, adding, “Urvashi Vaid meant something more, deeper, and more intimate, and for me, as a South Asian leader, when I felt so invisible in the LGBTQ community, Urvashi’s leadership said, ‘Yes, we are here, and yes, we can lead.”

“At a time when South Asian queers were hardly visible even in bars and clubs, seeing someone like her in the forefront of the American LGBTQ+ movement, challenging President Bush on AIDS and writing about virtual equality was truly inspiring,” Roy wrote in a statement to Gay City News. “It gave many of us the confidence to be both South Asian and queer at the same time without apology.”

“Urvashi Vaid was always so generous with her time and unstinting in her support for the fledgling South Asian LGBTQ+ movement in the USA,” Roy wrote.

When Trikone turned 20 in 2006, Roy wrote to Vaid for her thoughts to mark the occasion. Vaid responded promptly with “one line [that] feels prophetic now,” he recalled, referring to the current conservative backlash.

“The right-wing in America would not be as powerful as it is today if moderates and liberals took LGBT people or the centrality of racial justice more seriously,” she responded.

Vaid’s professional peers recalled her commitment to LGBTQ rights, women’s rights, anti-war efforts, immigration justice, and many other social causes as they responded to the news of her death.

“We are devastated at the loss of one of the most influential progressive activists of our time,” Task Force Executive Director Kierra Johnson said in the release. “Urvashi Vaid was a leader, a warrior and a force to be reckoned with.”

Vaid’s leadership, vision, and writing helped “shape not only the Task Force’s values and work but our entire queer movement and the larger progressive movement,” Johnson said.

“Urvashi was an uncommon intellect, a loyal and good friend, a fierce and uncompromising advocate, and a relentless activist for true justice for all,” wrote former NCLR executive director Kate Kendell, who was Vaid’s legal peer and friend.

Lesbian writer Sarah Schulman recalled her friendship and activism with Vaid despite the fact they “never agreed politically,” she said.

Schulman, also 63, knew the end was near for Vaid. During the early days of the pandemic, Vaid organized a monthly virtual lesbian get-together, “Lez Hanging Out,” that she belonged to. The virtual group transformed into a support group for Vaid as her cancer progressed and she got sicker and sicker, she said.

Schulman called Vaid a true “insider/outsider,” stating that “her impact is completely immeasurable.”

Schulman said she and Hubbard went to Vaid to get financial support for the “ACT UP Oral History Project.” Vaid was at the Ford Foundation at the time. Hubbard and Schulman asked for a $25,000 grant, but Vaid helped them rewrite their application and they were awarded $300,000 to interview 187 people involved with or touched by ACT UP over 18 years.

“She had a vision that was much larger than ours,” she said. “She was working with powerful politicians and rich people, but at the same time, she was always very present in grassroots and direct-action movements. She was able to maintain respect and access on all fronts, because of her extraordinary personality.”

Vaid is survived by Clinton and was an aunt to Alok Vaid-Menon.

Kendell told Gay City News that a public memorial honoring Vaid’s life will be held on her birthday, October 8.