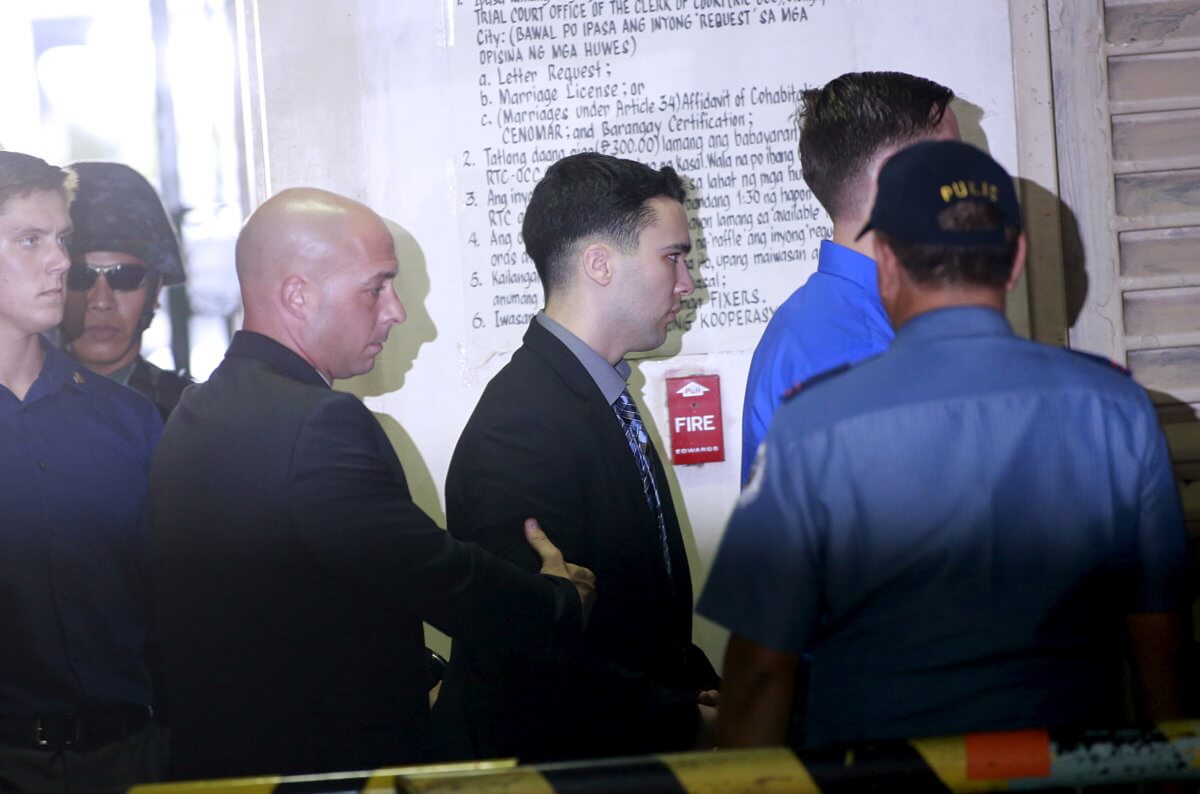 US Marine Lance Corporal Joseph Scott Pemberton in 2015 during his trial for the murder of Jennifer Laude, a transgender woman, in the Philippines.
Reuters/ Romeo Ranoco

In a move that drew criticism from the administration of President Rodrigo Duterte, a Filipino court ordered the early release of an American marine who has been serving a decade-long sentence for the brutal killing of a transgender woman six years ago.

Joseph Scott Pemberton, a lance corporal, was stationed in the Philippines in 2014 for joint exercises when he met 26-year-old Jennifer Laude at a nightclub. Video footage showed the pair entering a hotel room and later saw him leaving the room alone. At trial, Pemberton admitted to choking Laude unconscious, which led to her death in that hotel room, but he argued that she was still breathing at the time when he left, according to The New York Times.

Pemberton’s legal team ultimately employed a classic “panic defense” tactic, arguing that he felt like he was “raped” because Laude allegedly performed oral sex on him before he knew she was transgender. Panic defenses have historically been utilized by defendants who argue that they acted out of panic after learning about the victim’s gender identity or sexual orientation. Nearly a dozen US states, including New York, have outlawed the use of such a defense.

Pemberton, who was originally sentenced in 2015 to a maximum of 12 years behind bars before the sentence was reduced to 10 years, was ordered to be released after he appealed to the Olongapo City Regional Trial Court in an attempt to cut his sentence short. The court explained away the early release by touting Pemberton’s good behavior, which the court deemed to be equivalent to the years remaining in his sentence— a “good conduct time allowance.”

While Laude’s family immediately appealed his release, officials in the Philippines said he would be released once the court’s order is processed.

Since his 2015 conviction, Pemberton has been held in a location removed from the general prison population in accordance with a controversial 1999 Visiting Forces Agreement (VFA) between the US and the Philippines that governs punishment handed down to American troops stationed there. That agreement and the special treatment given to Pemberton sparked protests in the Philippines.

Duterte’s presidential spokesperson, Harry Roque, who represented Laude’s family in court during Pemberton’s prosecution and helped them secure $100,000 in a settlement, tore into the court for the release as well as the flimsy sentence in the first place.

“Laude’s death personifies the death of Philippine sovereignty and the light penalty imposed on Pemberton proves that despite the President’s independent foreign policy, that Americans continue to have the status of conquering colonials in our country,” Roque said in a written statement.

Duterte, who has faced widespread charges of human rights abuses in part for his aggressive approach to the nation’s war on drugs, has also faced questions about his approach to LGBTQ rights. Though he told an LGBTQ conference in 2017 that he would protect the queer community and once expressed a willingness to hire LGBTQ people in his administration, he has also denounced marriage equality and awkwardly told a crowd last year that he “used to be gay” but was “cured.”

Pemberton’s release drew criticism from a series of LGBTQ groups in the Philippines.

The Lesbian and Gay Legislative Advocacy Network, or LAGABLAB, is a coalition of Filipino LGBTQ organizations that especially took issue with Pemberton’s housing placement at the Philippines’ military headquarters.

“The early release of Pemberton is another injustice to the memory of Jennifer, her family, and the country,” the group said in a tweet. “Jennifer’s life is not worth six years of solo and comfortable stay in Camp Aguinaldo.”

Another Filipino queer group, Bahaghari, condemned the release in a Facebook post, saying that the entire case from the beginning has been a “massive slap to Jennifer’s family.”

“The feeble conviction set a terrible precedent for the LGBTQ+ community and the Filipino people: under the VFA, if a US soldier brutally murders a transgender woman in Philippine soil, they would ultimately roam free after as little as six years of incarceration,” the group said. “In Pemberton’s case, it was ‘incarceration’ in an exclusive [Joint United States Military Advisory Group] compound inside Camp Aguinaldo where only American personnel and Philippine officials with clearance may enter. It is no stretch to assert that Pemberton has, in fact, been serving ‘jail time’ comfortably, at ease, and with impunity.”

Bahaghari added, “Pemberton’s release is two-pronged. Firstly, it represents the unfettered violence and injustice the LGBTQ+ community continues to face. Moreover, it symbolizes the Philippine government’s continued submission to US imperialism. Justice for Jennifer cannot exist without both being decisively ended.”