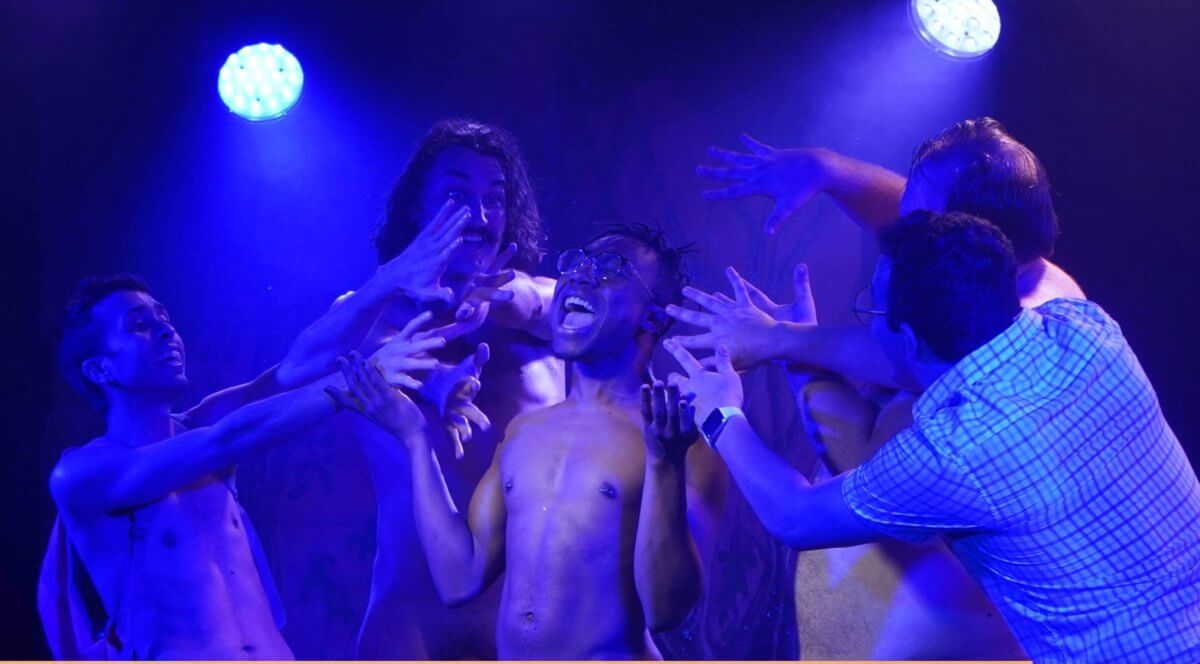 If you went to Cherry Grove on Fire Island, had one too many Cosmos at the Ice Palace Underwear Party, passed out while stumbling through the Meat Rack wearing nothing but your Nasty Pig jock strap, and had a wild fever-dream, it might be something like “Camp Morning Wood: A Very Naked Musical.”

The title pretty much says it all. The musical comedy, fully revamped since its popular run in 2019 just in time to celebrate Pride month, is as campy as it gets. And yeah, for much of the show, the guys are fully naked, letting it all hang out. Conceived and directed by Marc Eardley, with a book and lyrics by Jay Falzone, this zany romp is a demented mashup of “The Wizard of Oz,” “Into the Woods,” and “Rocky Horror.”

I should probably note that this is a live, in-person Off-Broadway show whose main aim is to tickle the funny bone, titillate the limbic system, and forget your troubles for a spell. There’s no point in calling out flaws in production values, narrative logic, pacing, or acting and singing abilities. It’s scrappy and slapdash by design, and that adds to the charm.

In fact, you could say “Camp Morning Wood” carries on the illustrious way-gay tradition of Charles Ludlam and the Ridiculous Theatrical Company from the 1960s and 70s, which parodied classics with a wry, flamboyant flair.

The plot, such as it is, centers on a handsome horndog named – what else – Randy (Thomas Delgado). He’s driving deep into the Catskills, in pursuit of a “super-hot twink” he’s been chatting up on Grindr, but gets lost, both physically and emotionally. He’s just turned 30, you see, and he’s looking for love and validation in all the wrong places.

After Randy blows a tire and runs off the road, he wakes up to find himself in the magical, gay naturalist retreat of the title, where he meets a motley band of campy campers. There’s Titus (Da’Merius Ford), a savvy Black man who enjoys shattering stereotypes and Derek (Chris Ogren), an unassuming cutie with a dark streak. He also meets Hunter (Anthony Logan Cole), a geeky bear with a taste for leather, Jacques (Brady Vigness), a spirited, flirty optimist with a French accent (think Lumiere from “Beauty and the Beast”), and Kincaid (Sean Stephens), the cocky, condescending, aforementioned super-hot twink.

“Are you a good bitch or a bad bitch?” Titus asks the dazed newcomer, in one of the many hat-tips to, well…you know.

When the closeted, money-grubbing Republican Senator Snatch (a badass Shelton Lindsay) threatens to take over their land, the campers spring into action. But will they be able to save their beloved sanctuary?

“Camp Morning Wood” is at its best during the musical numbers, where the witty lyrics and sly references to other musicals, from Sondheim to Disney, are highly entertaining. To its credit, the show refuses to take itself too seriously, with self-referential quips like “This whole song is just one big metaphor.” The zippy pre-recorded score is by Trent Jeffords, Derrick Byars, Matt Gumley, and Jeff Thomson.

Not that “Camp Morning Wood” is total frivolity. What with all the pendulous penises and talk of “taking care of morning wood,” the ethos is more sex-positive than boner-inducing. What shines through is the importance of positive body image, exposing vulnerability without the barrier of clothing. The actors were thoughtfully cast to represent a full range of male body types, and, let’s be frank, penis sizes.

“Everyone is beautiful,” Eardley said of his casting strategy. “Bodies are beautiful and confidence can come from the inside if humans are supported the right way. We hope our show reminds everyone of that.”

In the expository number near the top of the show, the campers sing a ditty with an inclusive message:

“Come one and all, ‘cause big or small…ev’ry ugly duck’s a swan here. We leave our judgements at the gate: there’s no fight and no debate. The only thing we hate is hate.”

The Asylum Theatre, normally a comedy club, is an ideal venue for this production. The intimate basement space has an appealingly gritty underground vibe, and has a bar where theatergoers are welcome to buy drinks (highly recommended) throughout the 90-minute, intermissionless show.

As I see it, the joy was intensified because, for most of the audience, including myself, this was their first in-person performance inside a theater since the shutdown due to COVID some 15 months ago. People seemed beyond thrilled to be sharing a communal experience of live theater once again. Proof of vaccination is required, and masks are optional.

If you’re not yet comfortable literally rubbing elbows with cheering, unmasked strangers in a confined space, you may wish to sit this one out. May I suggest hopping the next train and ferry to Cherry Grove?