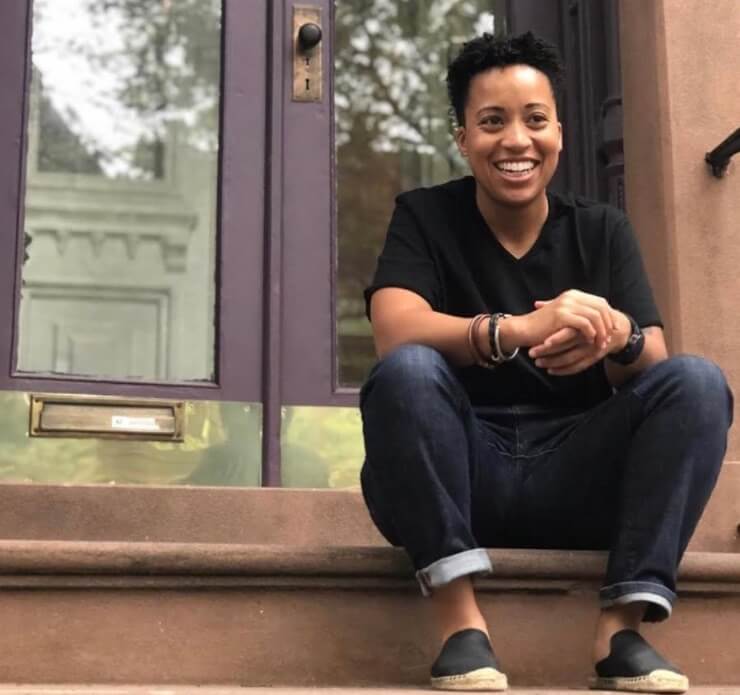 Crystal Hudson already beat out two other LGBTQ candidates to land the support of Lambda Independent Democrats of Brooklyn.
Twitter/@crystalrhudson

The club threw its support behind Crystal Hudson in District 35, Jacqui Painter in District 38, Josue Pierre in District 40, and Wilfredo Florentino in District 42. LID made the endorsements roughly seven months ahead of voters flocking to the polls for Democratic primary competitions across the city.

The endorsement in District 35 was much anticipated in a race that also features two other LGBTQ candidates — out gay community leader Terrance Knox, a former LID co-president who did not seek the club’s support, and out trans attorney Alejandra Caraballo — and gives Hudson a boost in her bid to become the first out LGBTQ Black woman elected to the Council. The winner of the race will ultimately replace term-limited Councilmember Laurie Cumbo, the current majority leader.

As she addressed the club, Hudson noted her diverse work experience spanning from sports marketing to politics and asserted she made a career change to work for Cumbo because she sought to serve her local community. Hudson has faced heat from her opponents for her stint working under Cumbo, who has been criticized for land use decisions such as her approval of the oft-criticized Bedford Union Armory project.

In a written statement, Hudson said she is “honored” to land the support of LID.

“I am proud to partner with LID’s members as we work to get the 35th District, Brooklyn, and all of New York City through one of the most challenging health and economic crises of our time,” Hudson said.

Although Caraballo — who hopes to become the first out trans city lawmaker — was unsuccessful in her bid to secure LID’s endorsement, she used her speech in front of the club to expand on her experience as an attorney and explain how that work has sharpened her political perspective as a supporter of the sex work decriminalization movement and the need to hold police accountable.

“Over the years I saw exactly how the NYPD impacted communities of color and the LGBTQ community,” Caraballo said.

In District 38, Jacqui Painter — an out queer Democratic Party County Committee member and activist running to succeed out gay Councilmember Carlos Menchaca in Sunset Park and Red Hook — landed LID’s support less than a month after publicly launching her campaign. The 27-year-old old stressed that the city has forgotten about working class communities, immigrants, seniors, and others in her district, where she said public housing residents suffer in inhumane conditions and Hurricane Sandy relief has been too slow to come.

Striking an aggressive tone on policing, Painter joined the chorus of candidates who are calling for drastic reductions in the NYPD’s budget. She said she wants the police department to cut the budget in half.

“I’m honored and thankful to be endorsed by LID,” Painter said in a written statement. “As a queer woman this is very special to me. LID has been on the front lines fighting for social justice and LGBTQ+ rights for decades.”

In District 40, Pierre secured the endorsement of LID less than a year after he slammed the brakes on a campaign for State Senate against Democratic incumbent Kevin Parker and instead jumped in the race to succeed term-limited Councilmember Mathieu Eugene, who is the first Haitan-born city lawmaker.

Pierre, who is a cousin of Brooklyn Democratic Party boss Rodneyse Bichotte, touched on his personal life, recalling his journey as a young child moving to Flatbush from Haiti at age five and growing up in a two-bedroom apartment with his mother, a home health aide, and his father, who worked as a mechanic.

Pierre also touted his diverse professional background, pointing to past gigs such as his work under City Comptroller Scott Stringer, as he emphasized that he has a well-rounded portfolio heading into the 2021 campaign. He has also served as a district leader and on his local community board.

“There was a time when it would have seemed impossible to be an LGBTQ+ Black man to want to run in Flatbush,” Pierre said. “But we are at the precipice of major changes, and I do believe we will have more Black LGBTQ+ people in the next Council and I look forward to being one of them.”

In District 42, Florentino — who told Gay City News earlier this year about his experience as a foster parent — described himself as a gay Afro-Latinx husband, father, veteran, lifelong community advocate, and Brooklynite. He informed club members about his experience navigating the military during Don’t Ask, Don’t Tell and segued that point into a broader message about policing. He denounced the over-militarization of law enforcement and stressed that weapons of war should not be used in residential communities.

In accepting LID’s endorsement, Florentino said, “LID’s support is an acknowledgement of our fight toward equity, justice, and transparency, and a repudiation of politics that have worked for the few and not the many.”