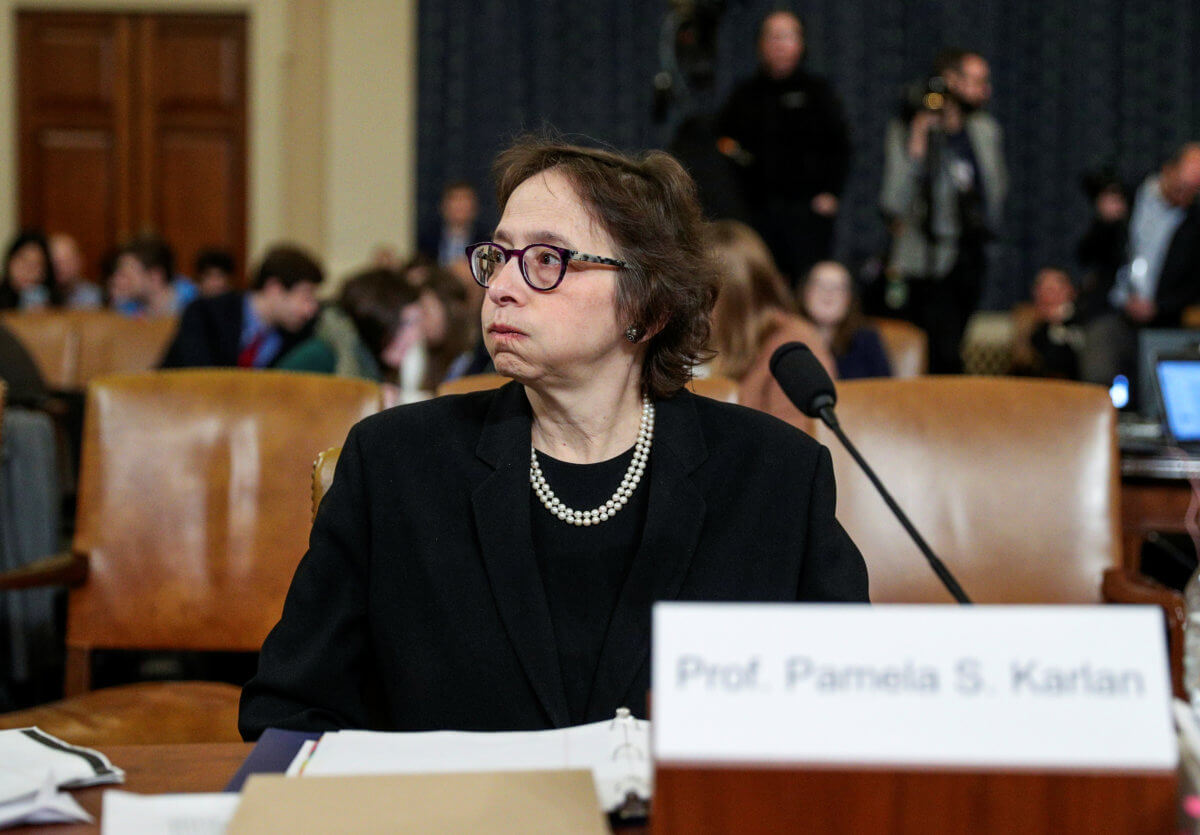 Out lesbian Pamela S. Karlan is leading the Department of Justice’s Statement of Interest reminding courts of the obligations of prison systems toward trans inmates.
Reuters/Loren Elliott

The Justice Department filed a “Statement of Interest” in the pending case of Diamond v. Ward in the US District Court for the Middle District of Alabama on April 22. Ashley Diamond, a transgender woman, is suing state prison officials for violation of her Eighth Amendment rights to safety and adequate health care.

The DOJ is not taking a position on the facts in this case, but is reminding the court of the legal obligation to protect trans inmates.

Diamond has been in and out of prison several times, and even benefited from the filing of an Obama Administration amicus brief in one of her earlier lawsuits struggling for appropriate treatment in prison. Her most recent incarceration, because of a parole violation, subjected her to the same old, same old: She was tossed into a male prison with inadequate attention to her safety or medical needs. Diamond’s litigation history has led to relationships with organizations, such as the Center for Constitutional Rights, eager to help her litigate, so she is back in court for a new round.

In 1994, the US Supreme Court issued its first opinion in a transgender rights case, Farmer v. Brennan, involving a claim by federal inmate Dee Farmer that the Bureau of Prisons was failing to protect her from sexual assaults by other prisoners. The Court ruled that if prison officials were deliberately indifferent to such risks, they could be held liable to the inmate for violation of the Eighth Amendment’s ban on “cruel and unusual punishment.”

Now Ashley Diamond, having been raped more than a dozen times since she was incarcerated last fall and denied her usual hormone treatment with appropriate monitoring, is claiming that Alabama officials are being deliberately indifferent to her safety and medical needs. The Biden Administration, shifting away from the transphobia of its immediate predecessor, was moved to lend a hand.

The Statement of Interest, prepared by attorneys from the Civil Rights Division of the Department of Justice (DOJ), led by Pamela S. Karlan, an out lesbian who is the Principal Deputy Assistant Attorney General for Civil Rights, gives the court a detailed description of the constitutional and statutory obligations of prison systems towards transgender inmates. Without taking a position on any of the facts in this case, the Statement of Interest reminds the court that the Prison Rape Elimination Act, passed by Congress to address the epidemic of sexual assault in prisons, requires prison officials to protect inmates against sexual assault, going one step beyond what the Supreme Court required in Farmer v. Brennan to mandate affirmative efforts.

The Statement of Interest reminds the court that prison officials are required to conduct an individualized assessment of the risks of harm faced incoming inmates, including taking into account the inmate’s concerns as well as the history of the particular institution and the past experience of the inmate. And, noting Ashley Diamond’s request to be housed in a women’s prison, the Statement of Interest mentions that failure to provide such alternative housing if it is necessary to protect a transgender inmate from sexual attacks could constitute deliberate indifference in violation of the Eighth Amendment and the Prison Rape Elimination Act.

Furthermore, when it comes to medical treatment, the Statement of Interest recites in detail the history of litigation establishing the right of transgender inmates to access to medically necessary care — once again determined on an individualized basis. Diamond contends that she is being denied treatment because of a prison policy of categorically denying particular treatment regardless of the individual needs of the inmate. If so, the Statement of Interest points out that this clearly violates Eighth Amendment precedents. A categorical refusal to provide a treatment that qualified health care providers agree is necessary for a particular individual is the very definition of deliberate indifference.

“Courts have recognized a wide range of interventions that have been deemed by the Standards of Care and qualified professionals as medically necessary to treat gender dysphoria depending on the individual needs of the prisoner,” wrote the DOJ. “These treatments have included gender expression allowances such as permanent hair removal, undergarments consistent with a prisoner’s gender identity, pronouns corresponding to a prisoner’s gender identity; and surgery, based on the circumstances of the individual prisoner.”

The Statement of Interest also noted court opinions stating that it is not enough to provide hormones; prison health officials must also monitor and adjust the dosage as needed to meet the individual needs of the inmate.

If the prison denies appropriate treatment without having a qualified health care practitioner make an individualized assessment, it is being deliberately indifferent to serious medical needs, because there is now a large accumulation of judicial decisions recognizing that gender dysphoria is a serious medical condition requiring adequate treatment. Although the courts of appeals have not spoken with one voice on these issue, the Supreme Court’s refusal last year to grant the state of Idaho’s petition to review an order from the Ninth Circuit Court of Appeals requiring prison officials to provide gender affirmation surgery to a transgender inmate should have sent a loud message through the federal court system.

The Statement of Interest is likely to carry considerable weight with the court. In most prisoner litigation, transgender inmates are representing themselves without external allies. The addition of outside public interest counsel helps to redress the power imbalance, and a Statement of Interest from the DOJ, which mentions that an investigation of Alabama prison conditions of transgender inmates is under way, may incentivize the prison authorities to offer a settlement that will provide Ashley Diamond with appropriate protection and health care and send a message to prison administrators nationwide.