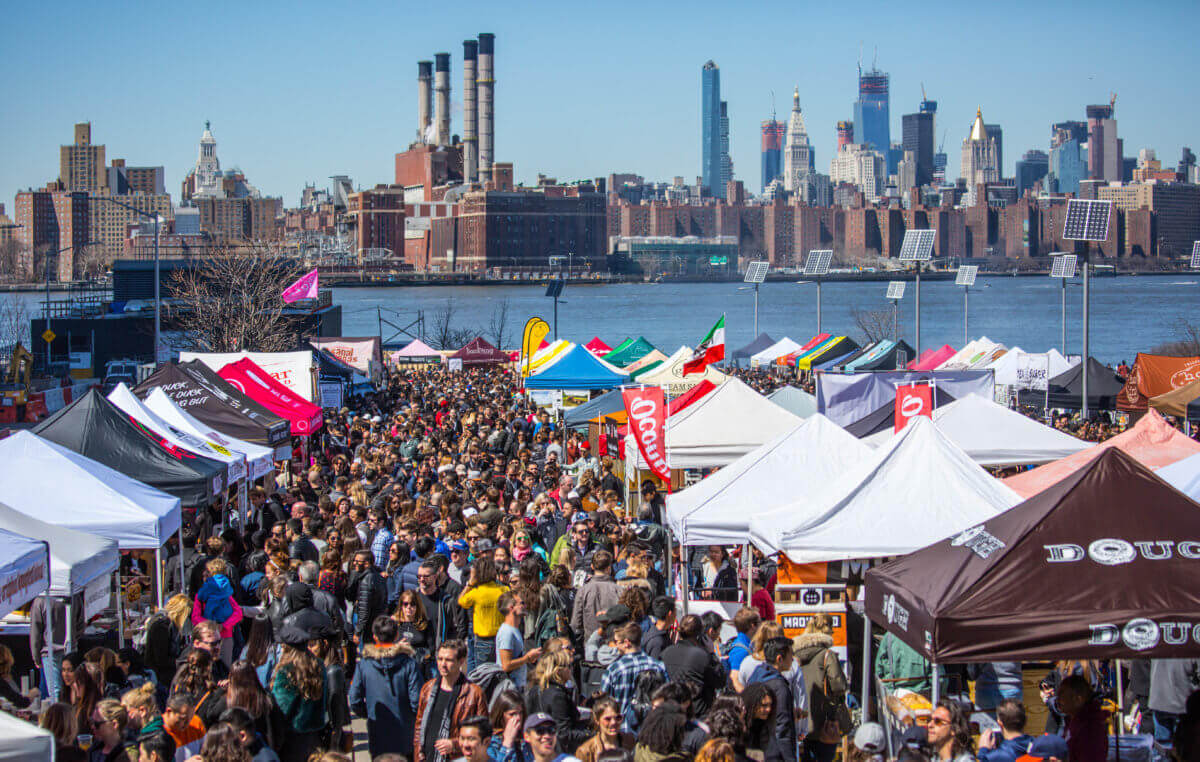 The New York State Office of Parks Recreation and Historic Preservation on April 12 withdrew a Request for Proposal for an al-fresco grub market at the Kent Avenue space, which sought to issue a five-year public-private contract for the site previously leased by the popular Smorgasburg food fair.

“As we welcome the transformation and the new experience we […] think it is prudent to cancel the current open food market RFP at this time,” agency spokesperson Randy Simons said in an email obtained by Brooklyn Paper.

Amid a controversial revamp of the park to honor its namesake LGBTQ civil rights icon with an oversized splashy mural, Albany officials revealed they also planned to open its two concrete slabs back up for a private concession after the renovation, releasing an RFP on March 2 with a deadline for proposals by the end of that month.

The agency’s change of tack follows blowback by locals and Johnson’s family against the park’s redesign, which led officials to ditch the mural and other decorative elements slated for the space and instead seek input via several public workshops over the past weeks.

“The state held the visioning sessions and we said, ‘Hey wait a minute, what about the RFP,’” said local district leader Kristina Naplatarski.

Since 2013, Smorgasburg has run its popular market every Saturday during the warmer months with an annually-renewed permit, but the new RFP offered a five-year license with an option to extend for another five years at the space formerly known as East River State Park.

Locals, who have criticized Smorgasburg for hogging the space during primetime weekends for the better part of the past decade, were incensed that the state was about to auction off the space for possibly 10 years without input from the community and only a month to take bids.

A coalition of small business and open space advocates raised concerns about the public bidding’s short timeframe and lack of advertising, giving locals little chance to make sure whoever gets the contract is a good partner, according to Naplatarski.

The state’s unpopular redesign of the park, which some said was little more than a pet project for Governor Andrew Cuomo, was derailed after outcry by the late Johnson’s family and neighborhood activists at an early March community board meeting.

The state scrapped the mural and other decorative elements and sought to gather public input for the park at a series of workshops, which started on March 31.

Officials extended the market RFP until April 15, but called it off after the activists — consisting of Brooklyn Allied Bars and Restaurants and the North Brooklyn Waterfront Coalition — called on the agency to withdraw the request entirely, issue another one-year permit instead, and work with residents to craft a new listing.

“Recent public workshops have highlighted the diversity of opinion on the appropriate commitment of these park spaces and its future park uses,” wrote Simons, of Parks.

Smorgasburg co-founder Eric Demby previously told the Paper that he planned to apply for the original RFP, but did not immediately return a request seeking further comment.

Naplatarski said the move offers the chance to look for a vendor that gives back to the neighborhood through benefits like local hiring and better trash cleanups, an issue in the area where garbage cans routinely overflow on warm weekends when locals and visitors flood the north Brooklyn.

“There’s an opportunity to color in the lines here to ensure that the bar is set higher for whoever is applying for this RFP,” she said.