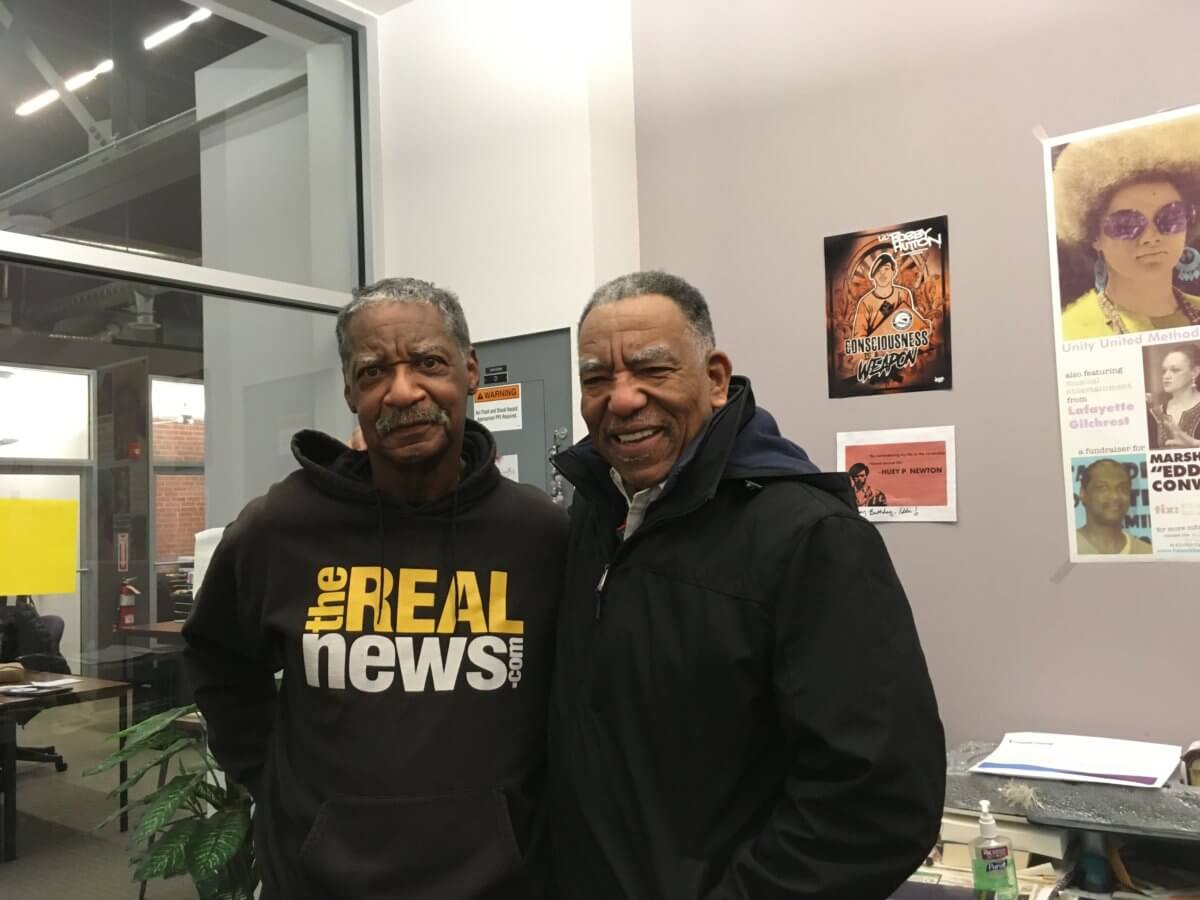 Eddie Conway and Paul Coates on February 20 of this year.
Susie Day

Awhile back, a friend and I were talking about History and rebellions, and I lamented how the 1871 Paris Commune had failed. My friend, a self-avowed psychic, said, “Yes, history records very few total victories over oppression. That’s because, on this worldly plane, most things are not supposed to work out. It’s all about the trying.”

So this will be a short essay on trying. On how, in the late 1960s, two Africa-American men met at the Baltimore chapter of the Black Panther Party for Self-Defense and tried to build “The Revolution.” And how, for the past six years, I’ve tried to write a book about them.

The book is “The Brother You Choose.” I’m happy it’s being published. Ultimately, though, the book fails. It has to, because the lives of the two brothers in question are too stunning to fit into an artful stack of perfect-bound pages.

The book covers the lifelong friendship of Eddie Conway and Paul Coates who, in their early 20s, had, like thousands of young Black people, come to the Panthers demanding, not just racial equality and an end to police violence, but a chance for Black people to reshape the world.

History tells us that the Panthers didn’t work out. You can blame hubris or planetary karma for this — but you absolutely must look also to the US government. Similar to government efforts today, infiltration campaigns like the FBI’s Counterintelligence Program [COINTELPRO] worked with local police to “neutralize” and destroy antiwar and liberation groups. No group was more targeted than the Black Panther Party.

When they met, Paul didn’t much like Eddie: “He had an attitude, you know. Eddie would just pop up and he was: ‘I’m a PANTHER. You just came on the scene? Get out of my way, squirt.”

Nobody could have known back then that COINTELPRO existed, but even amid community projects like the Free Breakfast for Children Program, both Eddie and Paul began to suspect that something wasn’t right. Eddie remembers how the cops set up a confrontation by getting an informer to start a fight on the street, then run through the Panther office:

The police pull up—screeeeee—all around our office.

“COME OUT WITH YOUR HANDS UP!”

Of course, we get locked up.

We go to court. Guess who’s on the stand? Yep. The guy that ran down the street, in our door, and out the back. They had to let everybody go because the Baltimore Sun found out this guy was working for the police. How could the Panthers be harboring a fugitive when the fugitive was a police employee?

When Eddie was arrested for the shooting death of a Baltimore policeman, Paul knew the charges had to be bogus. He vowed to never to leave the guy with the “attitude,” even after Eddie went to prison carrying a sentence of life-plus-30-years.

For over four decades, while Eddie was locked up, Paul stuck by him. He worked on legal campaigns and organized rallies, trying to get Eddie out. He started Black Classic Press to get books into the prison. Paul visited Eddie regularly, often bringing with him his seven kids. One of them, Ta-Nehisi, was to become a writer.

In 2014, when Eddie was finally released, Paul was there on the streets of Baltimore to welcome him. Today the two men, in their 70s, each married with families, jobs, and full, separate lives, are rock-solid. Each, the other’s chosen brother.

That’s a rough synopsis. But why did I, a queer white woman — whose life has been enhanced by centuries of systemic racial perks — want to put together a book on two radical Black dudes with whom I have so little in common? I mean, weren’t the Panthers macho? Isn’t today’s Black Lives Matter movement less hierarchical? Why get into any of this?

Because History, as we’ve known it, needs to shut up. History needs to listen to the elegance and bravery and intelligence of those who’ve tried to make The Revolution and “failed.” Listen especially to the generations of Black people like Paul and Eddie who have faced, since they were children, the ordinary, everyday poverty and brokenness and abuse and discrimination and soul-canceling of living in white America. Then listen harder to how these very people tried, with groups like the Panthers, to create something better. As a white person, now and forever, I need to listen to these stories. And there are many.

That’s why this book, except for my background narration of settings, history, and legalities of Eddie’s case, is 95 percent Paul’s and Eddie’s own words. I got these words from interviewing them for more than six years, beginning soon after Eddie’s release.

I’d take the train from New York to Baltimore every few months, and we’d hang out. I’d ask them questions and they’d talk about their growing up, their time in the army, politics, stuff that happened in and after prison. Among other things, Paul talked about the brilliant and abusive father he’s never stopped loving. About how discovering Black literature changed his life. About “getting my children through,” by which he means, teaching his kids to be strong, ethical people, respectful of their elders, but most importantly, people who stand up to cops.

Eddie talked about being raised in a house with a coal stove, and the trauma of seeing how much better the nearby white kids lived. About his apolitical teenage exploits, then seeing, as an army sergeant stationed abroad, the damage America was doing in the world. Though he works now at Baltimore’s Real News Network, Eddie is always about organizing: in the Panthers, inside prison, and now, around Gilmor Homes, where Baltimore cops killed Freddie Gray.

Paul and Eddie outlasted bad schooling, crap jobs, and 200 kinds of racism, including a phony murder charge and 44 years in prison. I respect them for surviving, but that’s not why I love them. I love them because, all through those years, they’ve shared a spirit that simply makes them laugh when they’re together. Without losing one ounce of ease or integrity, Paul and Eddie just roar with laughter at some of the shit they lived through. Why? The minute I start to look, it disappears.

In the spirit of The Revolution, I wish this book could change the world. Obviously, though, the world needs way more than this book. Says Ta-Nehisi Coates in the Afterword: “We endure so many losses. But here’s what’s important, no matter the result: If you stand up, in some profound way, you’re already achieving something.”

So I tried. I came close. But if failure is the essence of trying, then I’m glad I failed.